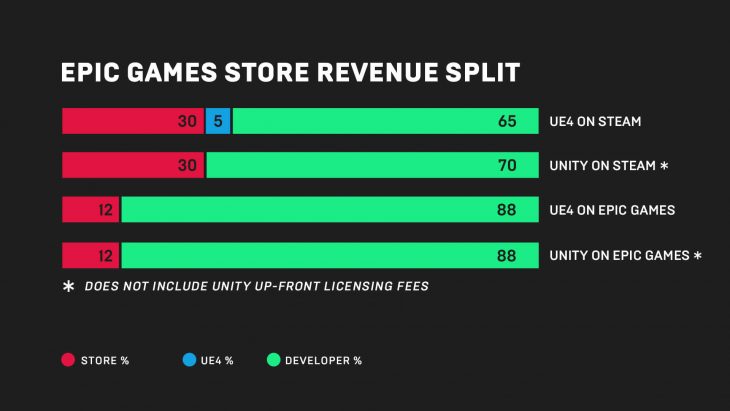 In defense of the controversial Epic Game Store exclusives subject, Epic Games CEO Tim Sweeney has disputed claims that they don’t benefit gamers. He believes that the strategy the company is employing for the Epic Games Store will only serve to provide a better marketplace for gamers.

Sweeney spoke out on Twitter yesterday to explain that the strategy of stocking PC exclusives on the Epic Game Store was the only way to end the 70/30 revenue split with developers. This revenue split is standard among digital storefronts such as Valve’s Steam.

This question gets to the core of Epic’s strategy for competing with dominant storefronts. We believe exclusives are the only strategy that will change the 70/30 status quo at a large enough scale to permanently affect the whole game industry.

Sweeney gave the example that in recent years many independent stores have failed to reach 5 percent of Steam’s scale. This is despite most of them having more features than the Epic Game Store, though their ability to offer discounts is limited by external authorities.

He went on to say that this situation has led to Epic’s exclusives strategy. While some gamers, such as the dedicated Steam user base, don’t enjoy this strategy, they do work, as demonstrated by revenues generated on the Epic Game Store compared to a title’s projected Steam revenue or revenue generated from console sales.

A prime example of this strategy is World War Z, the recent release from Saber Interactive. The game sold more than 700,000 units on PC through the Epic Game Store alone, making it the best digital platform for the title, including PlayStation 4 and Xbox One.

Sweeney then described how the 30 percent cut a store takes from game sales is often all the profits the developer stands to make. He describes this as disastrous, and believes that Epic’s strategy is a necessary antagonist to this industry standard, one that will give developers a fairer share of their game’s sales.

The Epic Game Store has a number of PC exclusive titles that are proving to be popular with gamers. For the moment many games are invested in storefronts such as Steam because of their games library there, and the achievements the store offers for playing games. However, as more developers opt to sell their games exclusively with Epic, gamers too should follow.