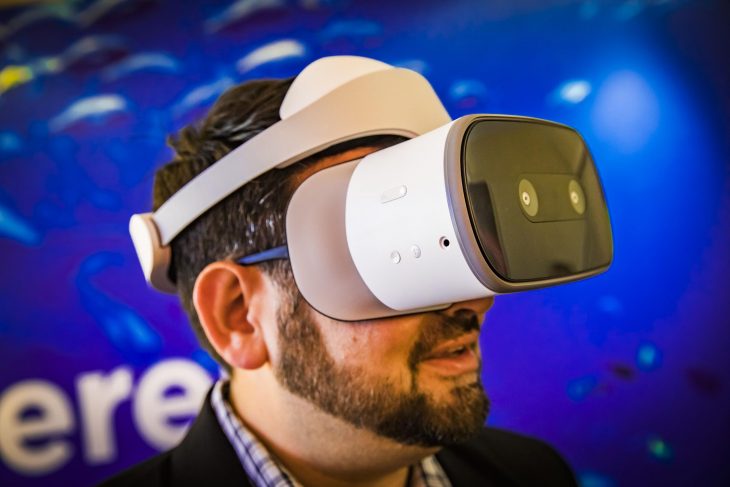 At CES 2018 earlier this week HTC revealed their new Vive Pro, a wireless and more powerful VR headset, as well as a wireless adapter for all of their VR headset devices. Now Google has announced a brand new VR headset that is fully standalone, based on their Daydream VR platform.

Google’s first VR headset, Daydream View, required a smartphone in order to provide its VR experience. This new headset, Mirage Solo, is completely standalone and wireless like HTCs headsets soon will be. Mirage Solo was developed in conjunction with Lenovo, a hardware manufacturer.

Mirage Solo has a 110 degree field of view. This puts it in line with the Oculus Rift, the HTC Vive, and Playstation VR, but brings it ahead of all other mobile VR headsets. It uses a Qualcomm mobile processor and 4GB of RAM. Unlike most other mobile headsets the Mirage Solo has built-in cameras and sensors which give it much more accurate head tracking capabilities. These cameras and sensors work with WorldSense inside-out tracking in order to provide six degrees of freedom for users. In terms of storage the device has 64GB of storage, all of which come together to support experiences played on the 1440p screen.

Facebook has their own on the go mobile VR headset, Oculus Go, which Mirage Solo will be directly competing with. While the Oculus Go is set to launch for a price of around $200 the Mirage Solo is likely to have a cost closer to $400, scheduled for release in the second quarter of 2018. However, the higher accuracy head tracking, larger field of view, and top of the line components could make Mirage Solo worth the price tag just like the Vive is worth it for other VR enthusiasts.

The fact that HTC is releasing a higher-spec version of the Vive in the Vive Pro, which will cost even more money, shows that there is a market for high-end VR technology, which Mirage Solo will fit into nicely.

Mirage Solo will be compatible with the entire Daydream VR library already available. The device will also use Daydream VR interactions, meaning it will be immediately accessible to users from the day it launches so users won’t need to wait for experiences that showcase its power, or make it worth the money for them.