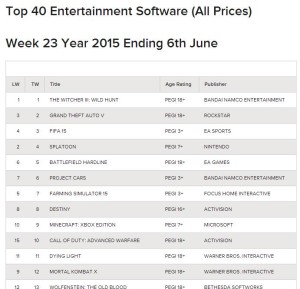 Recent market research carried out by MCV has revealed that the sales figures of physical games remain on top of the pack over digital sales.

Despite opinions that digital sales services such as Steam and GoG might be starting to take the lion’s share of the sales figures in the games industry from traditional brick and mortar shops, it appears that digital games are not so dominant.

MCV found these results by examining figures from UKIE/GfK Chart-Track with information gathered by SuperData. Their research discovered that a massive 80% of all games sales were boxed hard copies. This is a huge margin of difference, and clearly shows that physical copies of games are a firm favorite amongst gamers.

The research doesn’t specify though whether the physical copies were bought from an actual shop or if they were ordered online from a service such as Amazon. There’s no doubt that high street shops are in general losing out to such online services, so perhaps this research may come as a relief to shop owners.

The published figures show some surprising results. For the month of March, 81.9% of number 1 best-seller Battlefield Hardline’s sales were physical, while 84.2% of GTA V’s figures were physical. Call of Duty Advanced Warfare sold 76.2% physical and FIFA 15 sold 84.4%.

Minecraft sold the most digital copies in March, with 48.7% of their sales being digital. Still, that’s less than half of the game’s total sales. In April, 57.7% of Destiny’s sales were digital, the only game that was reported to have over half of its sales in the digital realm.

The information from Superdata was collected from both payment services providers and game developers. Their digital console chart is still in the beta phase, but they expect it to be fully up and running by the end of 2015.