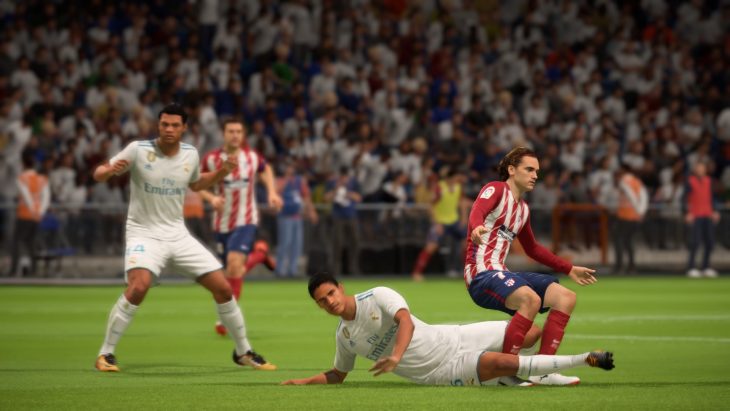 Ever get the feeling you’ve been cheated? I do. More or less every time I lose. At anything.

When I was five years old my family inform me that I upended a Monopoly board when I went bankrupt because “it wasn’t fair.” In tennis I gleefully apologise for any let cord that goes for me and pout and slump when my opponent gets one or mishits the ball and flukes a winner.

“One point can turn a match around,” I’ll think in my head, preparing to blame a five set loss on that one lucky shot.

Of course, as the saying goes “just because you’re paranoid, it doesn’t mean they’re not after you.”

I’ve been paranoid for a while about football simulation games. Pro Evolution Soccer, which I played religiously from 2000 – 2008, Sport Interactive’s Football Manager, which I’ve dedicated ridiculous portions of my life to, or my latest addiction, EA’s FIFA 17 and FIFA 18 have all awakened my inner paranoiac at one time or another, particularly when playing against the computer.

After all, playing the computer is a bit like playing the dealer in a card hall, isn’t it? The computer doesn’t just control one of the two teams playing, it controls everything. Okay, I choose when to press the pass or shoot button, but who decides whether that pass is going to be accurate or the shot is going to sail into the top corner or clip the post and go wide.

That’s right, the computer. My opponent!

In FIFA 18 these moments have been occurring so often that players have begun seriously kicking off about them on message boards. The game’s Squad Battles mode has been the primary target, with one user spamming a FIFA 18 subreddit with 30 clips of the AI mugging them with unlikely occurrences.

In truth, FIFA has been dogged with whispers of unfair play for years. Much of it revolves around an unconfirmed practice called “momentum,” which makes sense from a gaming point of view. If one team is winning and the other losing, making things tougher for the winning team and easier for the losing team is more likely to bring the match into balance and create drama – think of it as the footballing equivalent of a racing game providing speed boosts to players in last place.

For a game like FIFA 18, which seeks to place itself at the forefront of competitive esports, such in-game “doping” would not be appropriate and EA have been at pains to deny it.

Promptly shouting down a paranoia enhancing comment from an Italian EA rep who hinted that a system may be in place to help losing teams, an EA community manager took to an official forum to post a lengthy denial of any such system.

“I can assure you that the Advisor was mistaken in this instance,” the rep said. “There is no system in place to make teams perform better or worse like this suggests.”

Paranoiacs will fixate on the addition of “like this suggests” – and the fact that the rep locked the thread soon afterwards to prevent further comments/accusations.

The defence offered by the rep centres on the fact that in real football crazy things do sometimes happen: unfancied players score great goals, Messi misses sitters, keepers pull of miracle saves then throw in sitters.

This is true and makes it hard to prove that momentum does exist in FIFA 18. However, the fact is that now exists in the head of many FIFA players and that could be a problem for EA. After all, who wants to pay for the privilege of being cheated?

Going forward, EA would be well advised to prove, once and for all, that when players take on the computer it’s on an even playing field.