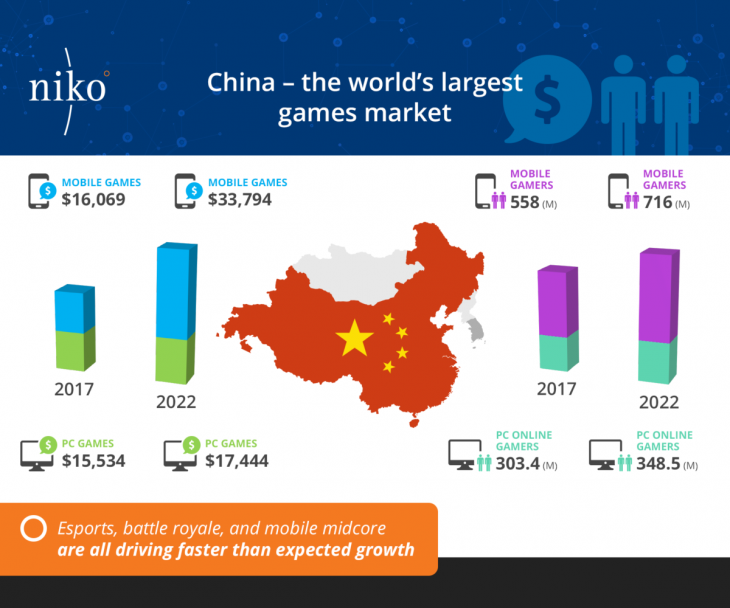 According to a recent set of reports on mobile and PC games from Niko Partners, a market intelligence firm, the domestic games revenue in China will rise to $42 billion in total by 2022.

China is described in the reports as the single most important market for PC online games in the world. This is because over half of all gamers in China primarily play online PC titles, which equates to around 300 million gamers. In total there are roughly 600 million gamers in China, which is about double the whole population of the US.

The reports also found that China makes up 25 percent of the global revenue for the mobile games market. This makes China the world’s largest market for mobile games.

Niko Partners said in their report that in order to produce products which will reach the top of the charts in China the market needs to be better understood. Companies such as game developers and publishers, and hardware and accessory manufacturers need to take the time to analyze the behavior, demands, motivations, and economic realities of Chinese gamers before they can deliver products that will perform well.

Based on the figures found in their reports, Niko Partners predict that by 2022 online PC Gamers in Japan will have increased in number to 350 million. The projected revenue based on this growth would be $17.4 billion, up from $15.5 billion in 2017 by just under $2 billion over the course of the next five years. Over the same period the mobile market in China is expected to reach $8 billion, leading to a growth from $16 billion to $24.7 billion for domestic revenue.

As the mobile games market gains better releases such as both Fortnite Battle Royale and PUBG it’s likely that the eSports scene on mobile will also grow, making it one of the strongest markets for gaming.

Related Topics: China, Markets, Niko Partners
By Admin in: Wholesale Games Industry and Market News on May 9, 2018 at 3:32 pm