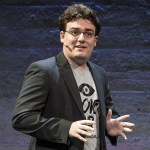 Palmer Freeman Luckey is the inventor of Oculus Rift, a consumer Virtual Reality (VR) head-mounted monitor, and the founder of Oculus VR company, which was acquired by Facebook (Meta) and later renamed Reality Labs.

Mr. Luckey was born in 1992, in Long Beach, California. From an early age, Palmer Luckey had a great interest in virtual reality, and he built on his own many experimental prototypes, before coming up with the Oculus Rift model.