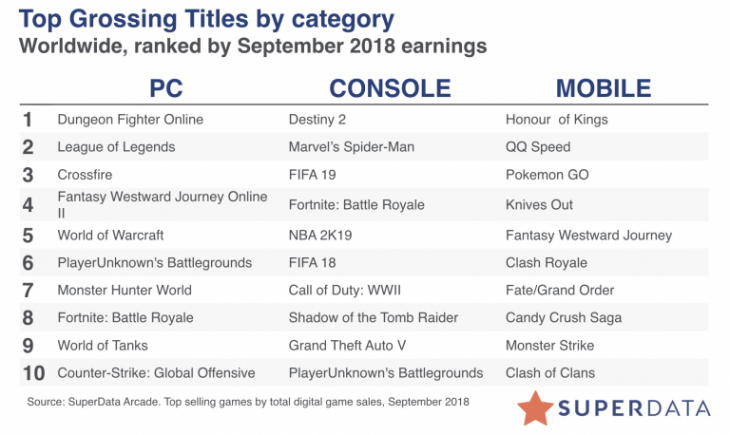 The latest Superdata report on digital spending on games shows a strong market leading into the holiday season.

In September consumers spent $1.24 billion on digital console games, which is up year-on-year from $912 million in 2017. This is just the latest in a number of months which have been up compared to the same period last year.

The key leaders in September’s growth were big triple A releases such as Marvel’s Spider-Man for PlayStation 4, and the latest Destiny 2 expansion, Forsaken. A shift closer to digital distribution for yearly releases such as NBA 2K and FIFA has also helped, and finally the continued popularity free-to-play title Fortnite.

Key takeaways from September 2018 included the best digital launch in the history of the franchise for FIFA 19. Year-on-year SuperData estimates that FIFA 19’s digital console sales were up by 18 percent compared to FIFA 18. While FIFA 19 broke records for the franchise it’s still underperforming compared to other triple A series.

The Forsaken expansion provided a massive boost for Destiny 2. The game performed so well it topped the Superdata digital console sales chart, and it also pushed up sales of the game’s deluxe edition. According to the data around 60 percent of the active user base in Destiny 2 purchased the latest expansion.

Marvel’s Spider-Man has become Sony’s biggest launch for the PlayStation 4 to date. In September alone the game sold 2.17 million digital units, although this figure excludes download codes from console bundles. The game only just managed to beat the previous best-selling Sony exclusive, God of War.

Finally NBA 2K19 set a new peak for the franchise. The game sold more digital console units than NBA 2K18, but franchise growth was lower than it has been for the last two titles in the series. It’s thought that the fact that NBA 2K19 launched a month earlier than usual had something to do with the lower sales growth overall, but there’s still time left in the year for sales to catch up with where they should be.

Heading into the holiday season a number of big releases are due for launch, including Fallout 76, Super Smash Bros Ultimate, and Pokemon Let’s Go. These should prove to boost the digital games market even further for the last couple of months in 2018.