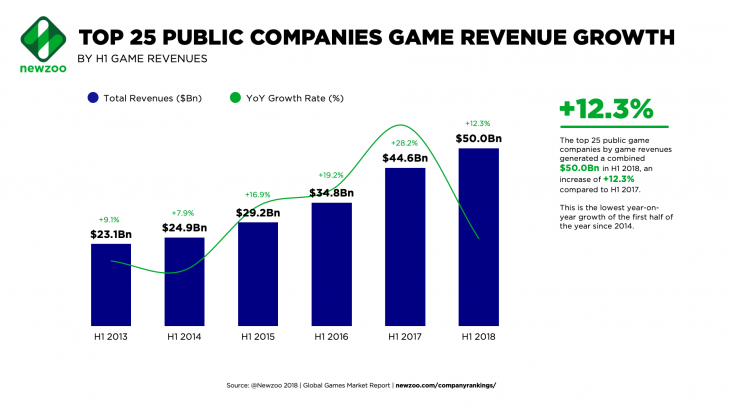 Newzoo’s latest report on the top 25 public gaming companies shows that these companies are still growing, just much slower than expected.

According to Newzoo the growth of the top 25 public gaming companies is slower than it’s been since 2014. The reasons for this are a few major global factors which have all had their own individual impacts.

In H1 of 2018, according to Newzoo’s report, the top 25 public gaming companies generated $50 billion in revenue. This figure is up by 12 percent year-on-year, but this growth is far smaller than it has been in recent years. Newzoo predict that the slowing of this growth is set to continue into 2019.

Among the reasons for this drop in growth rate are the game licence freeze in China, and a lack of diverse games titles and genres in the mobile market. Earlier this year Newzoo actually lowered their expected revenue for the global games market to $134.9 billion for 2018 due to these issues. 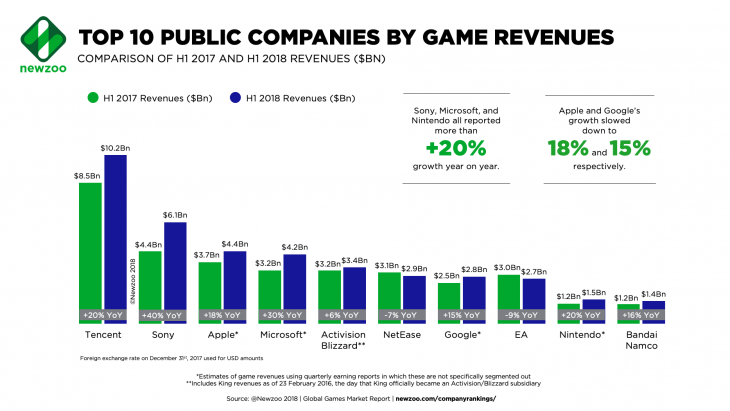 Nintendo, Sony, and Microsoft have reported year-on-year revenue growth of 20 percent. Showing that some of these companies are still performing well under the pressures of such events. Together these three companies alone generated $10.8 billion from console revenue.

Newzoo’s report shows that Tencent and Sony have the largest growth year-on-year, with Sony’s revenue up from $4.4 billion in 2017 to $6.1 billion this year. Sony has had a very good year for games, with God of War and then Spider-Man breaking all previous sales records for Sony exclusive titles.

Tencent, publisher and holding company for such developers as PUBG creators Bluehole, and Fortnite creators Epic Games, have also had a very good year. The battle royale genre is continuing to grow, and the other companies that Tencent has stakes in are performing well too, such as Ubisoft.

Surprisingly Nintendo’s growth to $1.5 billion from $1.2 billion last year is fairly low considering how well the Switch is selling. With big games still to release this year and into 2019, the company’s growth could prove to increase as the lineup of Switch titles gets larger.

Related Topics: Newzoo, Tencent
By Admin in: Wholesale Games Industry and Market News on November 11, 2018 at 11:05 am