SuperData report the Top 10 games in first half of 2017 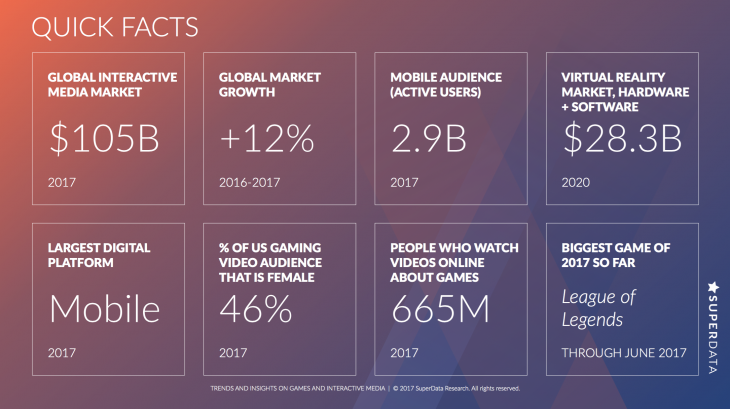 Research firm SuperData has released a report showing the top ten games of 2017 so far based on revenue generated between January and June of this year.

The global interactive media market has grown to $105 billion, showing global growth of 12 percent. The data predicts that the virtual reality market, and hardware and software markets will grow to be worth $28.3 billion by the year 2020.

The top PC game for the year so far, League of Legends, is also the biggest game of 2017 so far across all markets. It’s easily one of the most popular games to watch online, and there are now 665 million people watching video games online. In second on the PC gaming chart is Dungeon Fighter Online, with Crossfire following in third place.

Mobile has been the largest gaming platform for 2017 so far with 2.9 billion active users, and Honour of Kings being the top mobile game of 2017 so far. In second place is Fantasy Westward Journey, Monster Strike is in third position.