Nintendo Labo to allow for programming of robots 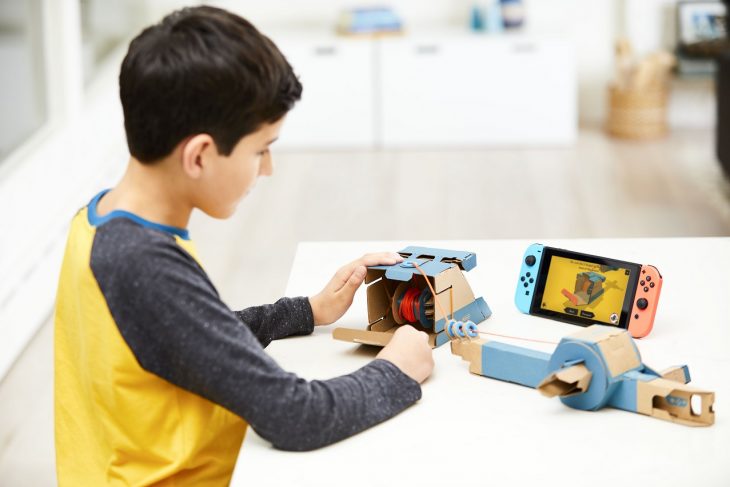 Nintendo have announced that Nintendo Labo will launch with a feature that allows players to program their own custom cardboard robots.

Nintendo Labo will launch in April of this year with a number of cardboard accessories that are used to interact with a variety of minigames. Nintendo have now announced that Nintendo Labo will come with a feature named Toy Con Garage. This feature lets players use a basic form of programming to build and customise their own robots made from cardboard, including electronic tennis and an electric guitar.

The programming uses basic if-then statements which are assembled as ‘building blocks’ in the Toy Con Garage interface. Players can then set buttons to certain outputs, such as the left Joy Con trigger button to the Right Joy Con vibration. By combining a number of these blocks together players can create a much more complex robot, one which they have created themselves.

Nintendo said that Toy Con Garage is how Nintendo Labo will expand beyond the six basic cardboard creations found in the Variety Set, and the Robot Set. Extra Joy Cons can be brought into the creation to allow for even more customisation options, and players can even use cardboard creations for something completely different than intended. The Piano can become an electric guitar, and the fishing rod can be used to control a remote control car or play music of its own.

While no images or further details have been officially revealed online Nintendo are likely to post news about this feature on their website soon. Among the marketing material for Nintendo Labo already released is the inclusion of this feature in a small one second clip which shows a cardboard man falling on his face. The programming interface uses the Switch tablet where players can simply draw a point from an action to an output in order to connect them.

With this new level of customisation, more than simply being able to colour in the cardboard objects, Nintendo Labo looks like it has a much longer lifespan than first anticipated. The basic cardboard sets will be enough to get players started, but the ultimate goal for Nintendo is to see players making their own creations with the tools they provide.