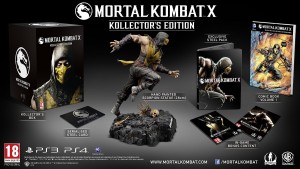 Mortal Kombat X is releasing today on three platforms, including PC, PS4, Xbox One, with PS3 and Xbox 360 platforms’ release date delayed till summer. The game has standard, Special and Kollectors edition. Among the nine combinations of platforms and editions releasing today, Mortal Kombat X Kollectors Edition for PS4 is probably one of the most anticipated, and it has unfortunately been delayed in Europe. There was a rumour that the delay was due to some problems/errors in the printing of the game. Some very limited quantity of Kollectors for PS4 was available for wholesale trade at the end of last week, with the rest expected to be available this Monday and Tuesday. Only a part of the quantity has arrived and the rest is still pending.

The Mortal Kombat X American Kollectors Edition seems to be doing fine, no delays have been reported.

Related Topics: Mortal Kombat X, Warner Bros.
By Admin in: Wholesale Games Industry and Market News on April 14, 2015 at 10:29 am