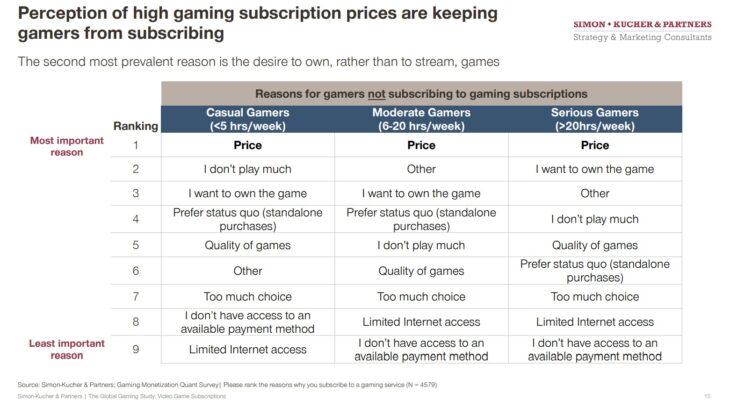 A new report has been recently released by Simon-Kucher & Partners, a marketing consultancy. The report, titled ‘The Global Gaming Study: the Future of Subscriptions’, suggests that a huge chunk of the overall population of gamers have already embraced subscription services with open arms.

The report is based on a cross-section of gamers, made up of over 13,000 people from 17 countries. It was conducted over the course of May and June 2020, with the assistance of Dynata, a market research firm.

20 percent of gamers in the US are currently playing games using an active subscription service. Apparently gamers in India and Indonesia were more than twice as likely to have a gaming subscription though.

The survey did identify something interesting though, there’s room for growth. This was seen in both those who already have a gaming subscription, and those who haven’t signed up to one at the time the survey was taken.

Following game quality, respondents said that price, the number of games, and the diversity among those games were also factors that came into play when choosing whether or not to subscribe to a service. Respondents differed in how important each one of these factors was depending on how many hours per week they spend gaming.

Those who didn’t have a subscription were very clear about the one factor for them when it comes to subscribing. Price. If the price point is right, most people seem to suggest that they will opt to subscribe.

Related Topics: Nintendo Online, Playstation Plus, Xbox Game Pass
By Admin in: Wholesale Games Industry and Market News on October 16, 2020 at 7:33 am