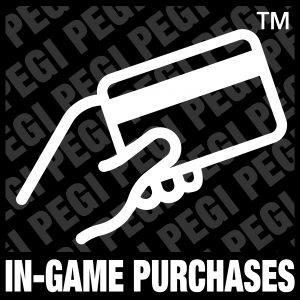 PEGI, the European games ratings board, has announced that they will be adding a new warning to boxed games by the end of the year. The warning will show consumers that a game contains the ability to spend money on in-game purchases such as microtransactions for cosmetic items.

Loot boxes, cosmetic items, and booster items are just some of the purchases that will warrant an in-game purchases warning for a game. With many titles now offering players the ability to buy such items it makes sense that they are forewarned if they don’t want to be exposed to the, or have their children exposed to them.

Digital-only games already use a similar rating through IARC, the International Age Rating Coalition system. The warning hasn’t appeared on physical game boxes before, but by the end of 2018 PEGI is confident that their new warning will be displayed on every relevant game.

PEGI’s new rating was brought about by the controversy surrounding loot boxes last year. The issue that caused some countries to declare loot boxes as gambling was that these randomised digital rewards could be purchased with real money. As such the nature of loot boxes has been compared to gambling on numerous occasions, prompting the publisher EA to remove them from certain games such as Shadow of War.

In-game purchases have actually been removed from titles such as Overwatch, Counter-Strike, and NBA 2K in the Netherlands and Belgium.

Simon Little, Managing Director of PEGI, told press that because in-game purchases have become so prevalent across most releases today, it’s important that the same level of warning is issued to customers, whether they’re buying a game digitally or physically. He added that many parents aren’t aware that such things as in-game purchases exist, and by warning them it could help them to avoid buying a game they don’t want their children playing.

According to a survey of consumers from Ipsos, which was cited by PEGI as a reason for bringing this new rating about, around 40 percent of parents have children who spend money on in-game items. About 80 percent have an agreement with their children on this spending, for example how much each week or month. Only 2 percent of parents said that they didn’t monitor how much money their children spend on these purchases.