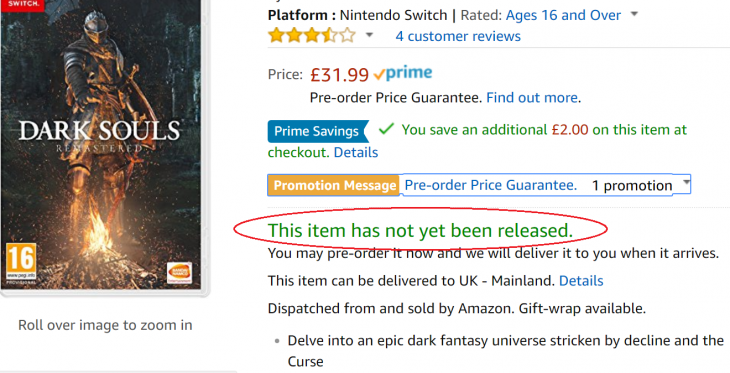 Pre-orders in Germany will need to be handled very differently from now on, as a new ruling that affects ‘placeholder’ dates comes into action. Products now must have a solid release date in order to be available to pre-order in Germany, as ruled by the Higher Regional Court of Munich.

The ruling was made as the result of a consumer protection claim against Media Markt, a prominent German electronics retail chain. The original claim was over the pre-order of a smartphone but has been extended to apply for all products.

What the ruling boils down to is that retails now must sell products on a pre-order basis with the latest date that they will receive the product. With video games consumers are quite often able to pre-order a game with a pre-order date of ‘TBC’ or even ‘TBA’, but now that must change for retailers offering products in Germany.

The effect this will have on the games market will be felt over the coming year or so, as publishers hold back on announcing a game until they are confident in the release date. While it’s understandable that consumers should be given a window of time in which they are guaranteed to receive their product, with video games the option to delay a title is often needed in order to allow for further development time and a better end product.

One very popular game that’s currently open for pre-order is Dark Souls Remastered for Nintendo Switch. Originally the game was meant to launch alongside the Xbox One and PlayStation 4 versions, but had to be delayed. This could be for a number of reasons, including multiplayer implementation, further work on game performance, or simply ensuring that the experience on Switch is the same as everywhere else.

With this new law in effect the game would have had to release on the original release date, the publishers would face serious consequences. The outcome would most-likely have been a far less than polished game, one that might not have included multiplayer, and one that would leave new players to the series bitterly disappointed.

Video games sometimes need the added development time a delay can allow for, but with this new ruling in effect it seems like that may be a thing of the past. From now on it’s likely that publishers and developers will add months onto their expected release date in order to make sure they have a finished product they’re happy with by that point.