The UK based online retailer Gameseek has gone into liquidation. Many orders with the company remain unfulfilled, leading to customer dissatisfaction and complaints.

Yesterday Eurogamer obtained a letter sent to Gameseek customers notifying them of the company’s liquidation. The letter seeks to identify debt owed to customers, and a decision on whether the amounts customers have already paid for their orders will be refunded will be reached by May 17, 2018. On this date a liquidator will be appointed to Gameseek.

Gameseek were active on social media up until May 3rd, after this it appears as though the company has been taken offline. The Gameseek website cannot be found, and any attempt at sending emails to previous employees are met with a ‘email address unavailable’ notification.

.@GameSeek I've received notification in the post today that you've gone into liquidation. 2 weeks ago I purchased a boxset from you for £28.12. This hasnt arrived & I've received no refund. I will be contacting @eBay_UK to resolve this.

As customers receive letters notifying them of the company’s closure they’re taking to social media to complain. One such customer posted on Twitter that they purchased a box set 2 weeks ago and, until the letter notifying them that they are now a debtor of Gameseek, they have received nothing. They say they will be contacting Ebay directly in order to resolve the situation.

In 2017 Gameseek were the centre of controversial news as they put the Nintendo Switch up for pre-order for £198.50, which is £80 cheaper than all other retailers were offering it for. After about 1000 people put deposits down in order to secure their console Gameseek put the price back up.

Company boss, Stephen Staley, said in an interview that he wanted to cancel the pre-orders at the time but couldn’t bring himself to do it. He went on to say that he didn’t want to ask customers for more money on a console they’d pre-ordered on the basis of a lower price, hoping that the gesture led to goodwill in the public eye as many, if not all other, retailers wouldn’t have followed the same behaviour.

Last year Gameseek opened their store to third party sellers, allowing them to offer a much wider range of products. The aim was to allow people and small businesses to sell their products at a much cheaper rate, with low membership and seller fees. While Gameseek is an online games retailer it seems as though even they’ve fallen prey to the tough times that the retail sector faces. 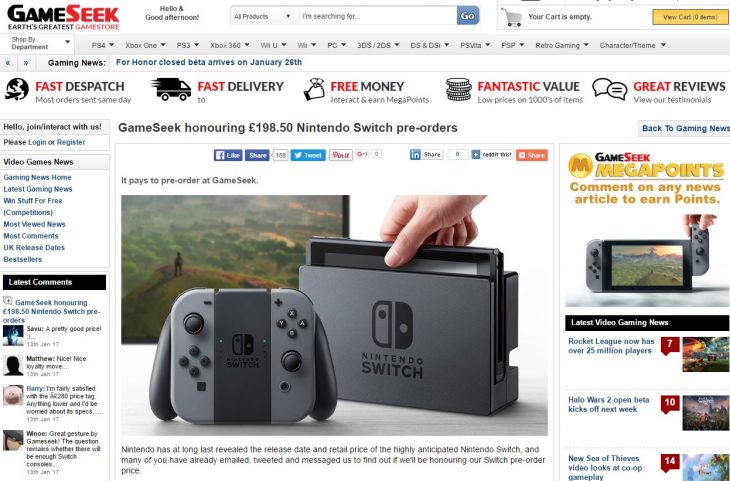 Related Topics: GameSeek, Retailers, Stephen Staley
By Admin in: Wholesale Games Industry and Market News on May 11, 2018 at 1:05 pm