Analysis of the UK’s Christmas charts of the top selling video games for five years.

GfK Chart-Track has published 2015 Christmas week’s chart of the best selling video games in the UK. The results have been expected with great interest by many. Of course, Christmas week is just one of the 52 weeks in the year, not particularly different than the previous week, or the following one, but many publishers and developers love to see their games appear in the Christmas chart. Christmas week is not even the biggest one in terms of sales, there are usually at least several weeks in a year that see significantly larger sales, for example the Black Friday week, or the weeks when some big titles are releasing, such as Call of Duty, Fifa, and a few other titles.

Since there is a lot of interest for Christmas week charts, we thought it would be interesting to have a look at the historic data of the Christmas charts in the UK in recent years, to analyse, and find some trends. For example what franchises have been most successful in the recent years? Who have developed and published the most successful games? To find answers on these and some other questions, we have looked at the UK’s Top 10 charts of recent years, from 2011 to 2015, please see the table above.

The above games were number one in the Christmas charts from 2011 to 2015. Call of Duty Advanced Warfare was on top not only on Christmas week but also has been on the top for the most time of the year, starting from November 2014 to November 2015 when Call of Duty Black Ops 3 released, which is currently on top of the chart. Fifa 15 has done very well too, after its release in September 2015 it has been in the top most of the time. Year 2013 was also mostly a Call of Duty year, with Ghost on top of the charts for most of the year, although Fifa 14 has managed to top the chart on the Christmas week. In previous year, Fifa 13 was less successful and ended on the fourth position. It was Far Cry 3 to compete with Call of Duty Black Ops 2 for the crown on Christmas 2012. The top of 2011 chart was quite different from recent ones though, with The Elder Scrolls V: Skyrim and Just Dance 3 on top. 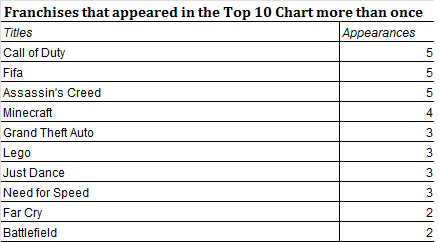 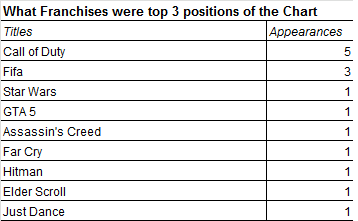 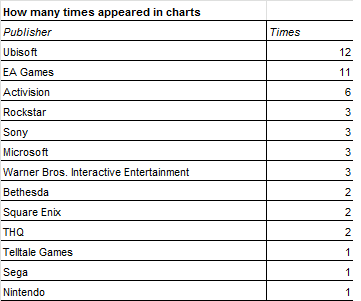 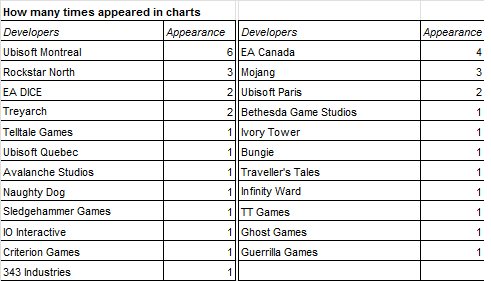 Christmas week’s top chart is a snapshot of the results at that moment and is not cumulative. It is more interesting to have a look at analysis of the yearly total results, and we are planning to do this soon.