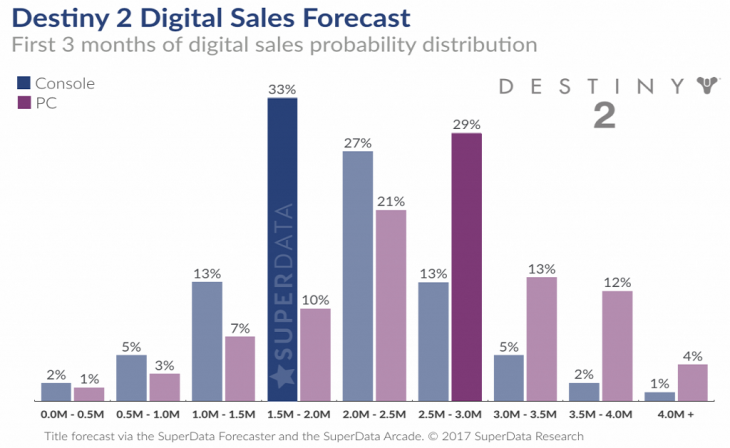 Newly released research from SuperData indicates that Destiny 2 could become the best selling premium PC title since the release of Overwatch. Currently Destiny 2 is expected to sell a huge 3 million digital units for PC alone in the first three months after release. Across both PC and console Destiny is expected to sell between 4 and 5 million digital units over the same period.

This news comes from the newly released SuperData Forecaster. The Forecaster provides an analysis of more than 500 titles released in the last few years, showing the effects certain factors such as early or late release windows, platforms, and cost per unit have had on games in the past. The Forecaster should provide an accurate prediction of how well a game will perform when it releases, providing it can take all given parameters into account.

Destiny 2 has been compared against the performance of Destiny on consoles since there was no PC release of the game. Destiny 2 will be released for PC through Battlenet instead of Steam, meaning it’s being released into an MMO ecosystem rather than the culmination of all PC games that Steam is, which should help it avoid being lost in a sea of new releases.

Other factors will be taken into account by the Forecaster as time goes on, such as pre-release trailers, new announcements from developers, and pre-order data from retailers. New metrics, statistical methodologies, and other refinements will be included in the model as SuperData perfect the Forecaster as well.

Sam Barberie, Vice President of Product and Research Development at SuperData told press in a statement that Forecaster offers a great starting point for those thinking about digital sales at a time when there’s a growing excitement around the digital gaming sales sector. The model is designed to help those considering a digital release for their title in the future plan for the most successful launch they can achieve, based on relevant historical data, which should give them an advantage over competitors and let them make their mark in the industry.