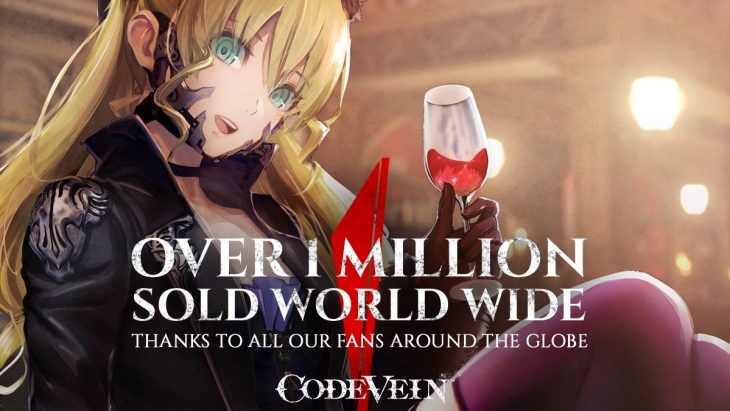 It has been announced via the official Code Vein Twitter account that Code Vein has topped 1 million units sold worldwide. Considering that the game only launched on September 27, 2019, this is an impressive milestone to reach so soon.

Code Vein is a Dark Souls inspired game from Bandai Namco. While Dark Souls has a strong fantasy theme, Code Vein instead opts to take on a new view of vampires, with many of the characters and enemies being obsessed with blood.

As a souls-like, the game appeals to the core fan base of gamers who enjoy that genre. These fans tend to pick up any game in the genre due to a want for more of the same content that they find so enjoyable. Code Vein is a lot more action oriented than games like Dark Souls, but it also has bosses that go through several stages before they can be killed, extending boss fights for far longer than in similar souls-likes.

Code Vein is unique in more ways than just its theme though. The game has several NPC characters who can join players as they explore the world, kill enemies, and hunt down bosses to defeat. These characters change the souls-like dynamic quite a bit, adding a new layer of complexity to the game.

Characters can heal players, but it comes at the expense of their own health. In some cases it might be better to allow a companion character to keep all of their health and get in close to the boss, while the player focuses on ranged attacks. With this dynamic between players and their companions, as well as the vampiric theme throughout the game, Code Vein can easily hold its own against similar games launching in 2020, like Nioh 2.

Bandai Namco only recently released the first piece of DLC for Code Vein, Hellfire Knight. This DLC adds a brand new area for players to explore, filled with items to find and unlock, as well as a new boss that proves to be incredibly tough to defeat. This DLC is part of the season pass that promises two more DLC releases in early 2020.