Call of Duty: Modern Warfare multiplayer will be revealed in August 2019 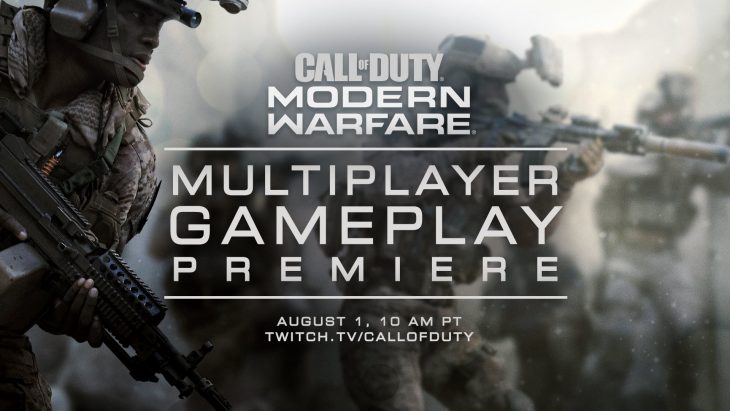 Infinity Ward, developers of a number of Call of Duty titles, have announced that they will be revealing the Call of Duty: Modern Warfare Multiplayer Universe on August 1, 2019. The announcement was made via the official Call of Duty Twitter account.

When Call of Duty: Modern Warfare was announced it was confirmed that players would be able to take part in multiplayer or the offline campaign, and earn rewards and progression for their overall profile through both. This is different to most other Call of Duty titles, which have each required players to level up their profile through multiplayer only.

Yesterday Infinity Ward revealed a new game mode for Call of Duty: Modern Warfare’s multiplayer, Gunfight. This mode pits two teams of two players against one another in small, intense matches that are reminiscent of the incredible Trials of Osiris game mode of Destiny 1.

Call of Duty: Modern Warfare is, in a sense, a remake of Call of Duty 4: Modern Warfare. However, the game’s story has been completely reworked and redesigned for the new release, bringing back familiar faces and settings but adding a new twist on them for the wider Call of Duty audience.

While the last game in the franchise, Call of Duty: Black Ops 4 from Treyarch, Beenox, and Raven Software, priorities multiplayer and completely removed the campaign from their release, Infinity Ward seem to be putting both the single player story and the multiplayer experience at the forefront of Call of Duty: Modern Warfare. In many ways the original Modern Warfare redefined the modern first person shooter game, and now it seems as though the remake will redefine what a Call of Duty title is once again.

PlatinumGames has revealed the second game in the Platinum 4. The Platinum 4 are the four-game announcements…

Developers of Asgard’s Wrath, Sanzaru Games, have been acquired by Facebook for an undisclosed amount.

This week Microsoft has quietly revealed some new details about the Xbox Series X, confirming a few…

CD Projekt is the second-biggest game company in Europe

CD Projekt has grown to become the second-largest video game company in Europe. The company is now…