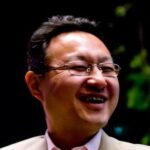 Shuhei Yoshida is the head of an initiative at PlayStation of working with external developers. He is the former President of Sony’s Worldwide Studios at Sony Interactive Entertainment. He joined Sony in 1986, in 1993 he became one of the initial members of the newly created PlayStation team.