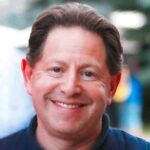 Robert (Bobby) Kotick is the President and CEO of Activision Blizzard. He was appointed to this position in 1991. Robert Kotick has initiated and successfully implemented the merger of Activision and Blizzard in 2008. In parallel to Activision Blizzard, he was on board of several other companies, including Yahoo and Coca-Cola.

Such titles as Call of Duty, StarCraft, World of Warcraft, Skylanders, Guitar Hero, and other have been published under his leadership.