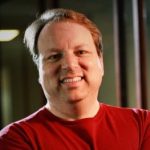 Feargus Urquhart, born April 19, 1970, is a video game designer and co-founder and CEO of Obsidian Entertainment, Inc. He studied Bio-Engineering at the University of California, Riverside, and the University of California, San Diego between 1988 and 1994. Early in his career, Urquhart worked for Interplay Entertainment, co-founding and designing games for an Irvine-based branch that focused on role-playing games, which he called Black Isle Studios. While working at Black Isle, Urquhart became involved in the production of the first two games of the company’s most successful franchise: the Fallout series.

Despite the success of Fallout, in 2003, Interplay began to stumble financially. The future of Black Isle Entertainment seemed bleak to Urquhart and several of his colleagues, and they decided to break with the company and founded their own studio, Obsidian Entertainment.

After several failed attempts at securing contracts with companies like Ubisoft and Electronic Arts, Obsidian was finally able to begin producing games in late 2003, after being approached by LucasArts to create a game based on the Star Wars universe. For a number of years, Obsidian enjoyed a run of largely successful games, including Fallout: New Vegas, South Park: The Stick of Truth, and Pillars of Eternity.

After the success of the crowdfunded Pillars of Eternity, in 2015, the company partnered with inXile and Double Fine to start a new crowdfunding website called Fig, through which they plan to host video game-based fundraising projects. Urquhart has had special involvement with the project, and now serves as a member of the Fig advising board.