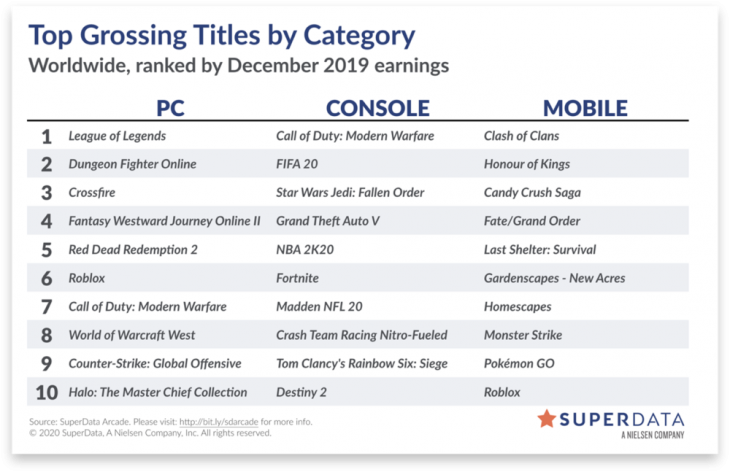 SuperData have released their report on consumer spending on digital games in December 2019. Their data shows that consumer spending reached an all-time high during the month, up by 8 percent year-on-year at $9.8 billion.

Part of the reason that console spending dropped for the month was a decline in spending on Fortnite. December 2018 was the point when spending in the game was at its highest, so this comparison was always going to be tough. The other part of the cause for the decline in spending was a lack of premium games releasing.

December was the best month of all time for Clash of Clans since it launched. Earnings reached $158.2 million thanks to updates to content and holiday sales, resulting in growth to monthly active user numbers, as well as conversion rates.

Call of Duty: Modern Warfare introduced a new business model for the franchise, and it appears to have paid off. The game differs from previous releases because it doesn’t have a season pass, offering only cosmetic items and a battle pass for sale. Revenue from Modern Warfare in Q4 was up by 4 percent on Call of Duty: Black Ops 4 during its launch quarter. December was the first month that players could spend money in-game in Modern Warfare, and spending reached a total of $78.7 million, which almost matches the total spending in Black Ops 4 for the entire launch quarter of $92.9 million.

December was also the best month for Grand Theft Auto 5 since December 2017. The game generated revenue of $84.7 million across consoles and PC, with discounts being the driving force behind downloads. Increased spending on premium currency in the game was also seen thanks to the latest update, the Diamond Casino Heist.

Finally, Red Dead Redemption 2 saw a big boost after its Steam debut. Digital sales more than doubled from 406,000 in November 2019 to 1 million in December 2019. Despite the small window of exclusivity with the Epic Game Store and Rockstar Games Launcher, the game has continued to sell extremely well.