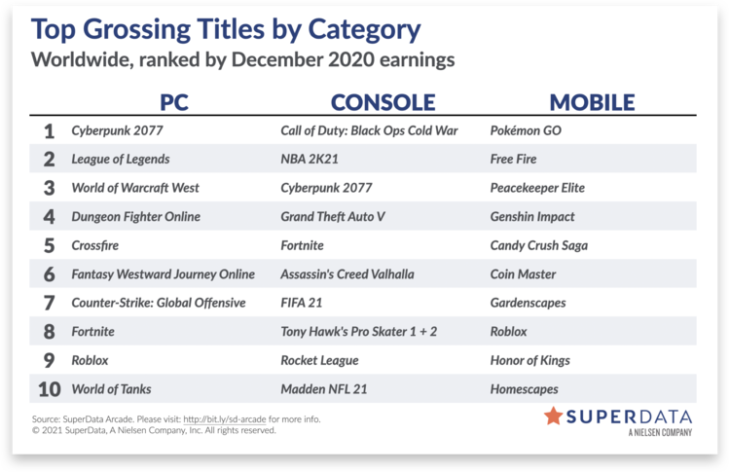 SuperData has released its report for the digital games market in December 2020. $12 billion was spent on digital games for the month, up 15 percent year-on-year, and the highest-ever total for a month since SuperData started recording.

Overall, mobile earnings were up by 5 percent year-on-year, console revenue was up by 16 percent, and PC revenue was up a huge 40 percent, mostly thanks to Cyberpunk 2077’s release.

Based on digital revenue and digital units sold, Cyberpunk 2077 had the biggest launch ever with 10.2 million units sold. This was aided by the developer’s reputation for delivering quality in The Witcher 3: Wild Hunt, their last major release and runaway success. The issues with the game are well known now, but they don’t make the sales any less impressive.

About 80 percent of all digital copies sold were for PC. It’s thought that this is due to the state of the game on consoles. However, certain PC storefronts such as GOG.com offered better pre-order bonuses which may have been an incentive.

In December, Fortnite earnings were at their highest since August 2020. Player numbers were also up, larger than any of those seen throughout 2019 in its entirety. The game has seen a huge boost yet again thanks to collaborations with well-known franchises such as Marvel’s Avengers, and even Predator. December’s Marvel Comics event brought in a record 15.3 million concurrent players, which was then backed up with new cosmetics from other franchises such as The Walking Dead and Star Wars.

Grand Theft Auto 5 saw its highest monthly earnings ever thanks to the release of a new heist, Cayo Perico Heist. The heist marks the first time that the seven-year-old game has been updated with a new open-world area for players to explore in Grand Theft Auto Online. Player numbers didn’t exceed the highest seen in 2020, but they did increase by 46 percent month-on-month.

While Among Us peak player numbers fell from November, the game continued to be 2.8 times more popular than the nest most-popular game, Roblox. A Nintendo Switch release also helped add new users to the player base and raise awareness for the developer’s upcoming expansions. 3.2 million copies of the Switch version were sold, making it the highest-earning version of the game for December 2020.