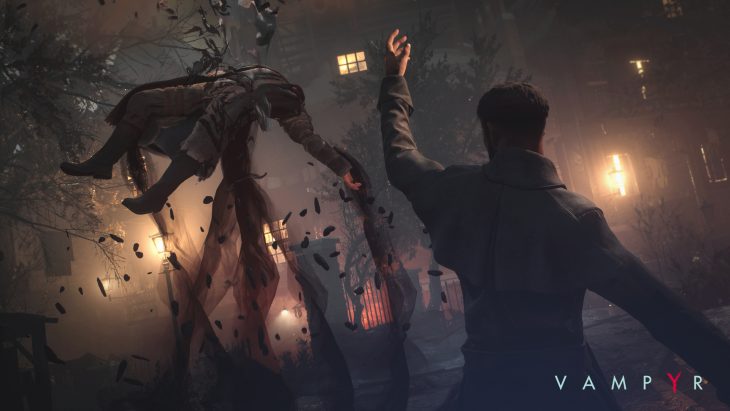 Vampyr, developed by Dontnod Entertainment, has finally had a release date confirmed, June 5, 2018. Dontnod revealed the release date for their upcoming vampire action role playing game at the end of their five part development documentary series based around the game. The last episode, Stories From the Dark, ends with the Vampyr logo fading into view as it does with all the others, but with the addition of June 5th just below.

Vampyr was due to release late last year but was delayed until Spring 2018. Now it seems as though the game has been pushed back even further, but at least this time Dontnod have given a firm release date which should help cement it a little.

Vampyr is a game about 1918 London, wracked by an illness that appears to be the flu, and a recently returned doctor who picked up more than he bargained for on his travels. As a newly created vampire players will discover the secret vampiric underworld of 1918 London and all the variations of vampire that come with it. As they progress they will unlock new abilities through skill trees and carve a very unique path through the story of Vampyr.

One of the most interesting things about Vampyr is that every non-player characters can be interacted with. Many developers animate most non-player characters but don’t go into the depth of actually giving them dialogue, and choices for the player to make. This, alongside the efforts DontNod have gone to in creating a believable world should help put it on the same level as Monster Hunter World’s world.

DontNod are best known for their work on Life is Strange, a point and click adventure in the same style as the Telltale Walking Dead games. They also released a cult classic sci-fi adventure, Remember Me, which still has a following today with rumours of a sequel in the works.

Based on their previous work players can expect a deep story with intense action and choices, as well as a superbly crafted fighting system that’s sure to allow them to create their own way of fighting as the vampire they’ve carefully crafted from the skill tree.