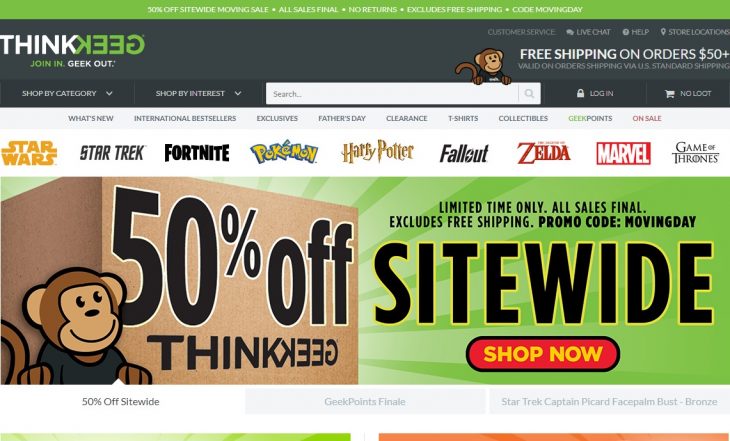 ThinkGeek, a subsidiary of Gamestop, have announced that they will be shutting down their online store, moving stock into brick and mortar Gamestop stores instead.

ThinkGeek will be shutting down their online store, which currently sells gaming and pop culture clothing, accessories, and toys. Most of this stock will be moved to physical Gamestop store locations where it will be sold alongside Gamestop’s normal products.

The ThinkGeek website will be shut down on the 2nd of July 2019, but more than 40 physical ThinkGeek stores will remain open after that. These stores will be based in the US only, where the company has been around for a number of years.

When Gamestop gave up their attempts to find a buyer in January 2019 they also experienced some issues with stock, losing a portion of it. As a result Gamestop told press that they would refocus their stores on the core products they sell, games and collectibles.

ThinkGeek sells a lot of collectible gaming products, so it makes sense for Gamestop to absorb this stock and offer it alongside their own as part of their re-focussed efforts. The new products could even entice new customers into stores and secure previously unattainable game sales.

In April Gamestop posted a loss of $673 million for the full financial year ending on the 2nd of February 2019. This loss even took into account the $700 million sale of Spring Mobile, a business Gamestop previously owned until November 2018.

While this news doesn’t appear to spell any further doom for Gamestop than their recent financial results already have, it does follow the same trend. However, consolidation of stock means that the company can offer their core customer base more choice, keeping shelves full for those browsing.

As digital storefronts claim more games sales each year, companies such as ThinkGeek and Gamestop are struggling to compete. UK retailer GAME broadened their offerings with physical gaming arenas, where consumers can pay to play their favourite games on high-end PCs. Currently Gamestop doesn’t offer anything like this, but with eSports becoming more prominent, and multiplayer games more popular, they might want to consider diversifying if they want to survive the changes the market is going through.