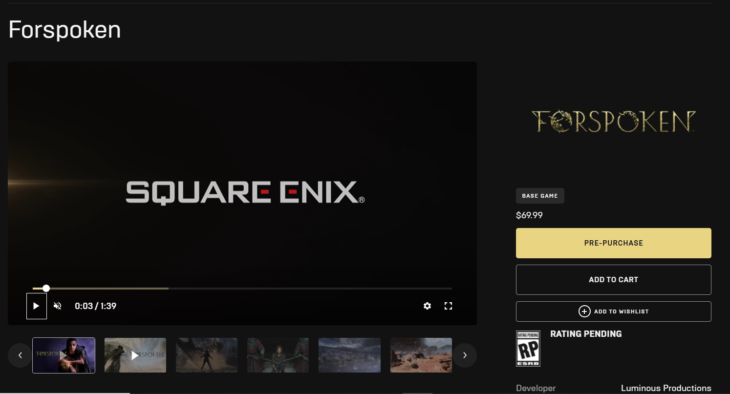 Square Enix has revealed that its upcoming PC games will now be selling for £65/$70 for the base versions.

Two upcoming titles, Forspoken and Final Fantasy VII Remake Intergrade, were added to Steam this week at the new price point. The digital deluxe versions are selling for £90/$95. The previous launch price for base versions of games was £60/$65.

This new PC pricing brings everything in line with what the prices have been on consoles since the Xbox Series X/S and PS5 launched last year. It seems as though Square Enix is the first major publisher to push its prices up.

Many publishers have been struggling to reach a unified opinion on the price of games for current-gen consoles and how that translates to PC too. Sony is selling the ultimate edition of some PS4 titles for a similar price, and has defended that decision as Square Enix will no doubt defend this move too.

The truth is that games have never been more expensive to make, with some having thousands of people behind them across development, marketing, and all levels of production and distribution.

However, the industry has also never been more lucrative. Particularly when developers can release a game that generates cash through microtransactions and season passes. However, developers insist that the cost of games hasn’t been in line with the development for some time, meaning this price change likely still won’t make that much of a difference.

Some companies, such as Xbox, believe that the price is something consumers will decide on, waiting for a cheaper copy if they need to. However, there are others that want to push the price up to make more money immediately.

Adjacent to this are early access games. These are discounted games that are developed alongside a community and often end up making more money over time than Triple-A games.

Overall, this decision from Square Enix will likely be met with a lot of bad feedback. However, companies need to stay afloat, and to do that, they need to make money. If all this price change does is ensure that the next Final Fantasy game can come out in time, then that should be enough for fans.