Sony under investigation in Turkey for game prices 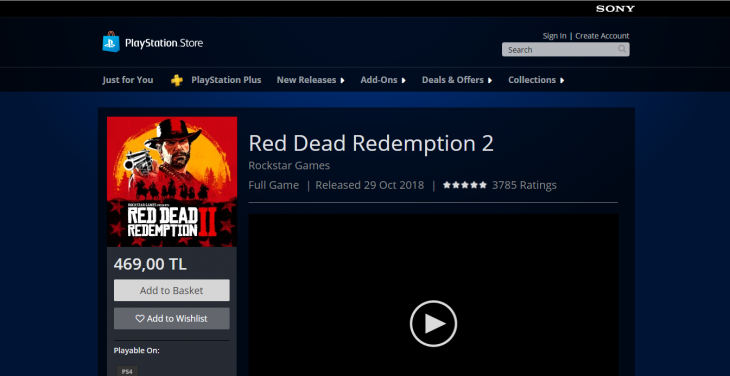 The Turkish lira’s value has lowered against the dollar recently, as the country experiences high inflation. In this current climate certain games on the PlayStation Store have been priced particularly high, and as a result Sony is now under investigation from the Turkish Ministry of Commerce.

According to a report from the Turkish edition of VG247 most games on the PlayStation Store are priced similarly to how they are in the rest of the world. However, other specific titles have been priced far higher than this, and it’s drawn the attention of authorities who believe something is wrong, either deliberately or mistakenly.

Over on Amazon.tr these games are priced very differently. Red Dead Redemption 2 comes up on the site for 344 TL, about $65, over $20 cheaper. The other games mentioned above demonstrate similarly lower prices outside of the Playstation Store.

The current investigation into Sony surrounding this price difference on their online marketplace accuses the company of increasing the prices of these games to a point considered above normal for the market conditions as of September-October. The investigation document states that this pricing negatively affects purchasing behaviour in consumers and is not only misleading, but deceptive.

Currently no action is being taken against Sony for this price difference. Instead the Turkish Ministry of Commerce has asked Sony for evidence as to why these prices are so much higher within their platform than they clearly should be. They’re also asked to provide evidence for their foreign exchange policy.

Related Topics: Turkey
By Admin in: Wholesale Games Industry and Market News on November 20, 2018 at 11:11 pm