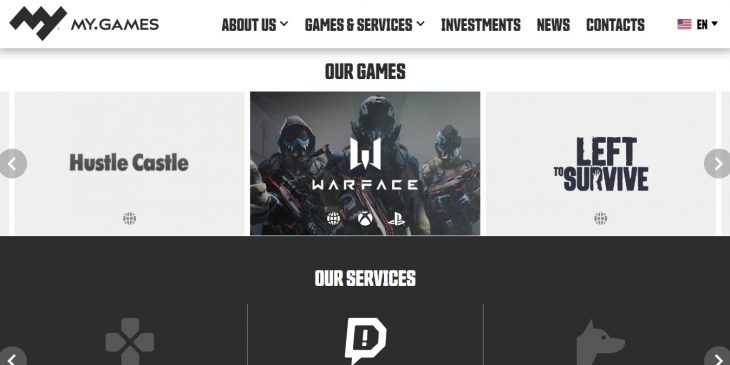 Mail.ru, one of the leading internet platforms in Russia, have announced ambitious plans to expand in the worldwide gaming market. Announcing the launch of a new brand, My.Games, the company spoke of the international market as “one of our top priorities for digital distribution.”

Mail.ru are already a huge player in the Russian gaming market. Games have become an increasingly important part of their business model, with the Mail.ru gaming division grossing over $100 million in Q1 2019.

Such large revenue streams ensure that My.Games will immediately become one of the top 50 gaming companies in the world, based on revenue size, when it is launched. The company’s infrastructure reflects this, with 10 regional offices, 1500 staff and 13 individual studios highlighting the scale of the business. Upcoming titles for My.Games include Lost Ark, Conqueror’s Blade, and a mobile version of Warface. In e-mails to Gamesindustry.biz the company’s marketing director Elena Grigoryan spoke of My.Games’ ambition for this year and beyond.

“We have our own PC platform, Games.mail.ru,” she said, highlighting the scale of the platform in Russia. “We have more than 12.5 million active users per month, so are successfully competing with Steam.”

The company clearly hope to take the fight to Steam in the international market, too. “We are currently developing a new platform, specifically for the international market,” Grigoryan noted. With the Epic Games Store and other rivals to Steam having made significant inroads into the dominance of Valve’s storefront this year, it could be a good time for My.Games to enter this market.

Grigoryan also highlighted exactly what My.Games can offer partners in both home and international markets. “For Western developers, our platform is a gateway to reaching Russian gamers. And for local developers, it’s a platform to get your game in front of a truly internationally.”

Russian developers are likely to be well aware of what Mail.ru can offer in the gaming sector, but international companies hoping to expand in Russia may look to familiarise themselves with My.Games and the opportunities the new brand may offer.