The official PlayStation blog announced the battle royale game PUBG (PLAYERUNKNOWN’S BATTLEGROUNDS) will be releasing on PlayStation 4 on December 7, 2018.

PUBG originally launched for PC in alpha, then a beta. It moved quickly to Microsoft’s Xbox One console after the company acquired Bluehole, the developer behind PUBG. For over a year the game has been exclusively available on Xbox home consoles only, limiting PlayStation 4 players to other battle royale titles such as H1Z1 Battle Royale, and Fortnite. Now however, PlayStation gamers will be able to compete in one of the most iconic battle royale games on the market.

In PUBG 100 players are dropped into a map, allowed a limited amount of control over where they land, and tasked with outliving every other player in the game. Weapons and vehicles litter each map, making it both easier and harder for players to survive as the safe zone closes in around them.

There are a number of pre-order bonuses available for PUBG on PlayStation 4, each bringing different content with them.

The Survivor’s Digital Edition comes with a digital copy of the base game, and the PUBG Survival Pass: Vikendi, which appears to be a version of Fortnite’s battle pass that awards additional progress specifically on the Vikendi map. This edition also comes with 2,300 G-Coins, a premium in-game currency, and 20,000 BP, which is a currency players can earn by playing matches.

The Champion’s Digital Edition comes with all of the same content as the Survivor’s Digital Edition, but packages in 6,000 G-Coins instead of 2,300. This pre-order bonus is an easier way to have more premium in-game currency to spend on new weapon skins and outfits for the player character.

Anyone who pre-orders PUBG for PlayStation 4 will receive bonus digital content in the form of a Nathan Drake Desert Outfit from the Uncharted series, as well as Ellie’s Backpack from The Last Of Us. Two different themes for the PlayStation 4 home screen will also be available to anyone pre-ordering the game. 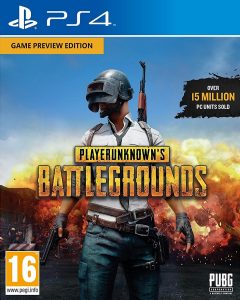