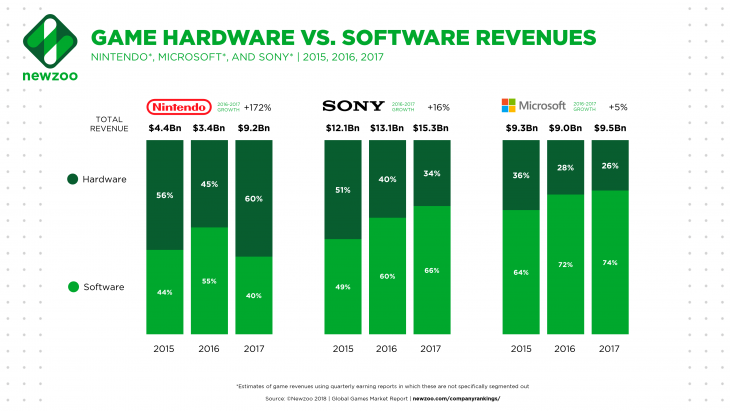 NewZoo have reported that Nintendo has an opportunity to generate $2.5 billion in revenue if they take advantage of a number of revenue streams that remain unused.

In 2017 Nintendo’s revenue was made up of hardware and software sales only, with negligible smart device revenue at 3 percent, and almost non-existent revenue from subscription services and in-game transactions. This is drastically different to Sony and Microsoft, with 34 percent and 26 percent of their respective revenues for 2017 accounted for by hardware sales, while Nintendo’s was 60 percent.

Nintendo remain a very traditional game company, producing titles that are either self-contained with no need for microtransactions, or occasionally added to with paid expansions. The first paid expansion for Splatoon 2 will be releasing this month, which is very late in the day for a game that released in 2017. Most publishers today release games with microtransactions for cosmetic features, and in some cases game-altering abilities, generating a massive amount of income in some cases such as Grand Theft Auto 5.

Even Nintendo’s share of the digital games market is low at 16%, though Nintendo is continuing to expand the Nintendo eShop for the Switch with new titles each week. However, Nintendo is currently lacking an online subscription service for Nintendo Switch players who take their games online. 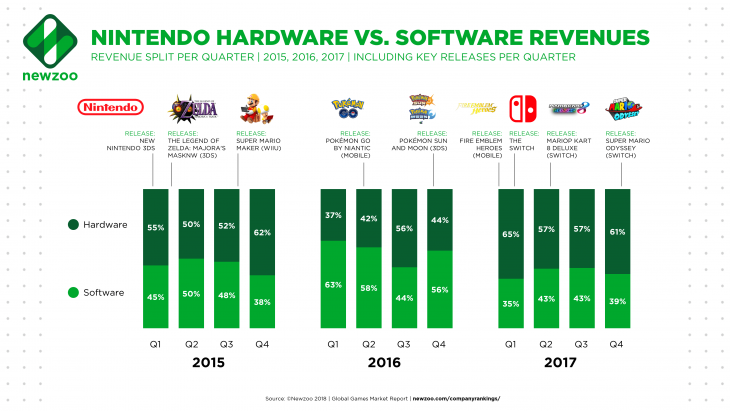 Sony and Microsoft both have online subscriptions which players must have in order to play their games online. These are priced at around £50-60 for the year, while Nintendo is planning to offer their subscription service for around £20 a year, a price players are bound to jump on given that the monthly benefits compared to Playstation Plus and Xbox Live Gold are very similar.

Nintendo also currently doesn’t generate any revenue from the mobile games market, a revenue stream which has proved to be profitable time and time again. There are already games using Nintendo properties on mobile devices such as Animal Crossing Pocket Edition, and the incredibly popular Pokemon Go, which bring millions of dollars in microtransaction revenue.

NewZoo estimates that if Nintendo take advantage of the mobile games market, implement their paid-for online subscription service for the Nintendo Switch, and embrace in-game purchases, they could boost their yearly revenue by $2.5 billion. However, the key to success in this venture will be in transitioning from a traditional games company to a modern one, without slipping up on key aspects as publishers like EA have done with microtransactions in Star Wars: Battlefront 2.

Nintendo already plan to begin charging players for Nintendo Online later this year, and paid-for expansions are slowly being introduced in the most popular games on Nintendo Switch like Splatoon 2, Mario and Rabbids Kingdom Battle, and The Legend of Zelda: Breath of the Wild. As time goes on Nintendo could rise to be a major competitor of Sony and Microsoft once again as it was when during the era of the Nintendo Wii.