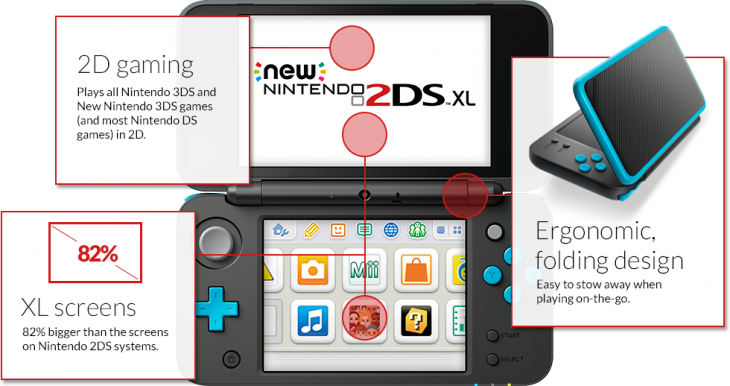 Nintendo made a surprise announcement of 2DS XL console last week. There will initially be two versions of the new console available at launch, releasing in the US and the UK on July 28, 2017. 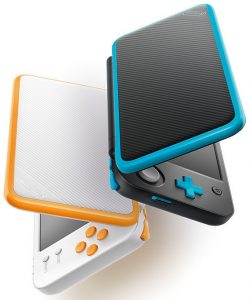 The new 2DS XL has been modified from the last version of the 2DS. The latest version of the console will go back to the classic DS design that includes two screens and a hinge between them so that the console can be folded in on itself. The larger screens have been added to keep up with the size of those offered by the 3DS XL, and the hardware has been trimmed down to offer a much smaller console for consumers to carry around with them. The console has 4.88 inch screen capable of displaying approximately 16.77 million colors at 400×240 pixel resolution and lower 4.18 inch touch-screen. The dimensions of the console are 6.4 in. × 6.3 in. × 0.8 in., and the weigh around 260 grams. 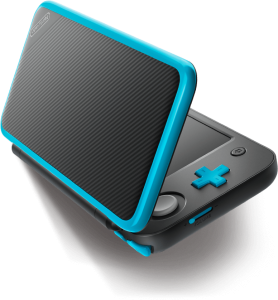 The Nintendo DS was launched in 2004. The console was unique in that it used dual screens for gameplay, one of which was a touch screen that required a stylus, that allows developers to integrate any number of new and interesting ways for players to interact with their games. After proving to be so popular Nintendo launched the Nintendo DS Lite in 2006, which was a sleeker and thinner console that took up far less space than the original. A brand new version of the console, the DSi, followed shortly in 2008. 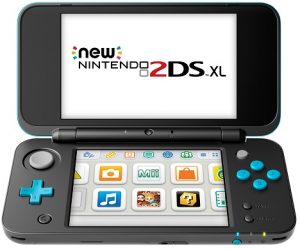 The Nintendo 3DS launched two years after the DSi in 2010. The 3DS allows players to view their games in full 3D, though the feature can be turned off should players wish not to use it. To date there have been six iterations of the 3DS, each adding something new such as better hardware, or larger screens.

The 2DS was launched as a cheaper alternative to the 3DS, as well as a handheld gaming option that didn’t include 3D. While the 3DS inherited the folding dual screens and folding mechanism of the original DS design, the 2DS did not. Instead the 2DS was a flat console with two screens that resembles a Nintendo DS if laid open and flat.

Related Topics: Nintendo, Nintendo 2DS XL
By Admin in: Wholesale Games Industry and Market News on May 4, 2017 at 8:33 pm