Gearbox release a tease for Borderlands 3 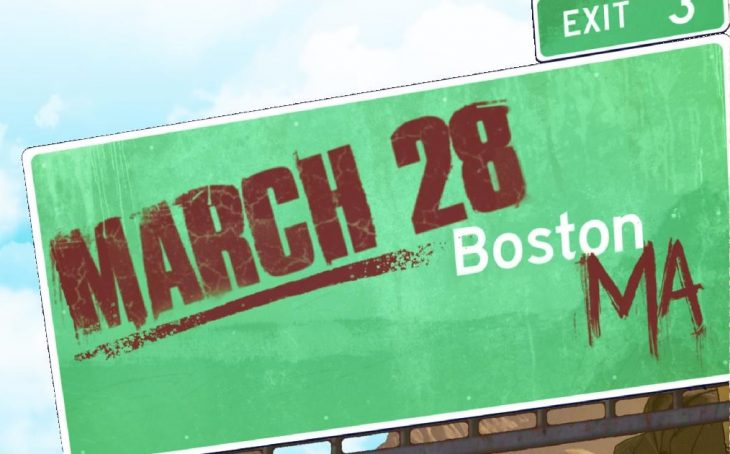 Gearbox Software have shared an image on their official Twitter account that many fans believe is a tease for the upcoming announcement of Borderlands 3. The Borderlands franchise has a huge fan base that has been waiting for a new title since the series was remastered for current-gen consoles in 2015.

The image in question is of a freeway sign with the word Boston and MA spray painted on it. The sign also features the date March 28th, and at the very top right the word Exit 3. This last detail is what has so many Gearbox fans so excited, because it hints at the game being a third entry to the borderlands series.

The date from the image, March 28th, looks to be a not-so-subtle indication that Gearbox are planning to reveal this game at PAX East, which runs from March 28th until the 31st. Gearbox hold a regular theatre presentation at PAX East, and this year it falls on Thursday March 28th. The final hint to this being the event at which Gearbox is referring to is the location, because PAX East is held in Boston MA.

For many gamers Borderlands 2 was one of the best first person shooters of the last gaming generation. Gearbox released several pieces of DLC for the title that kept players coming back again and again for even more looter shooter action.

Borderlands 3 will no doubt have some impressive improvements to systems and gameplay over all previous Borderlands titles. One of the best parts of Borderlands 2 was the almost limitless number of weapons that could be acquired, which will almost certainly have been upgraded to an unlimited number in Borderlands 3.

Daybreak Game Company, best known for H1Z1 and EverQuest, has been acquired by Enad Global 7.

Very, a UK retailer, cancelled a number of orders for the PS5 and Xbox Series X/S due…