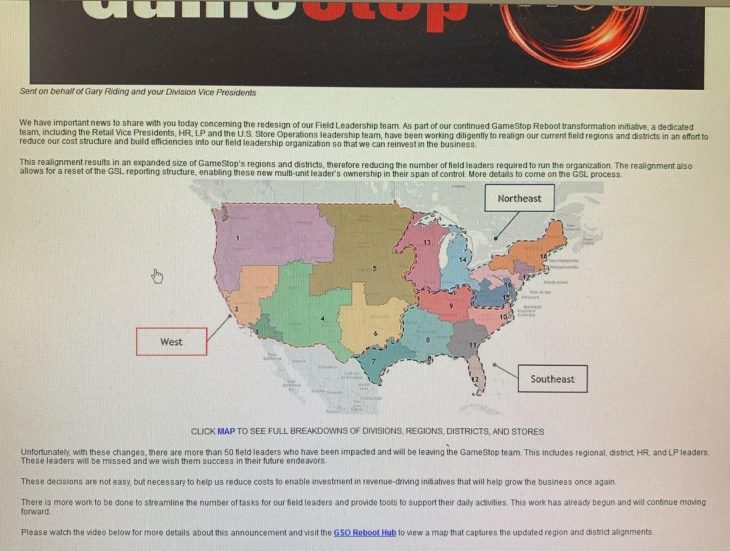 Today it’s been revealed that GameStop is laying off more than 50 Regional Leaders throughout the company. These layoffs are part of the company’s continued reboot transformation initiative.

Among the Regional Leaders being let go by GameStop are employees in positions such as: Field Leaders, District Leaders, Human Resource Leaders, and Loss Prevention Leaders. These layoffs are part of the reboot transformation initiative that GameStop is implementing to focus less on pushing products on consumers, and more on creating spaces for the local gaming community.

An image shared by a member of the gaming press showed an internal memo distributed within GameStop. The memo indicates that GameStop is restructuring their regional and district lines, with 18 new districts created over three regions. No confirmation of the exact number of layoffs has been made so far, but the scale of the changes in this image indicate that significant downsizing is occurring.

In addition to the image that has been Tweeted out, which showed the internal communication on GameStop’s own software, a forum thread adds more credence to this news. Over on the GameStop Subreddit, a thread discussing the losses of District and Regional Leaders has been gaining traction, with over 200 comments at the time of writing.

It seems as though most GameStop employees are still in the dark regarding the reboot transformation initiative, but the effects of it can be felt all the same. District and Regional Leaders will have built up relationships with many other employees within the company, and now those employees are gone there will be voids left between staff and management.

GameStop has not revealed its plans for transitioning from a product-focused company to a community-focused one. However, with products moving to become less of a priority for stores, it would make sense that the company remove the people responsible for supply chains early, since they won’t be needed in the long run.

GameStop could comment on the news later today, though the company will likely issue a statement that gives very little away about their plans. This will be both to protect them, and their employees, who will be eagerly awaiting any news themselves.

Related Topics: Gamestop
By Admin in: Wholesale Games Industry and Market News on August 1, 2019 at 1:27 pm