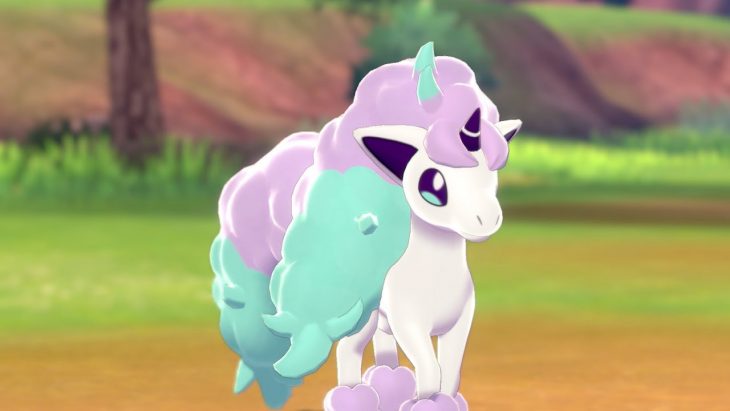 The Pokemon Company has released official details about one of the new Pokemon revealed during the 24 hour Pokemon livestream, Galarian Ponyta.

Galarian Ponyta is a regional variant of Ponyta, a staple to the Pokemon roster since the very first games on GameBoy. The new Pokemon was first seen galloping through trees in the recent 24 hour Pokemon livestream, but only now have details about it been released.

The Company Company has announced that Galarian Ponyta is a Pokemon Shield exclusive, meaning anyone playing Pokemon Sword won’t be able to catch it. Instead, players will need to trade with players using Pokemon Shield in order to get this exclusive Pokemon.

The Pokemon Company also revealed two of Galarian Ponyta’s abilities. Pastel Veil is an ability that protects other Pokemon on the field, preventing them and Galarian Ponyta from being poisoned. Pastel Veil will also cure the poison effect if a Pokemon is afflicted with it when it joins the battle with Galarian Ponyta.

Run Away wasn’t explicitly explained, but it sounds as if it will allow Galarian Ponyta to leave tough battles. This could be helpful if an affect is cast that usually prevents players from leaving battle, or if the player is down to their last Pokemon and needs to escape and recover.

The Pokemon Company explained that Galarian Pokemon have been in this region’s Glimwood Tangle Forest since ancient times. As a result they’ve been exposed to overflowing life energy, and have absorbed it. Galarian Ponyta store this energy in their manes, and they will sparkle when a lot of energy is built up there.

Galarian Ponyta is a Pokemon that is intrinsically linked to the new region in Pokemon Sword and Shield. Players will no doubt have lots of fun discovering what other Pokemon have been warped by this region’s unique landscape.