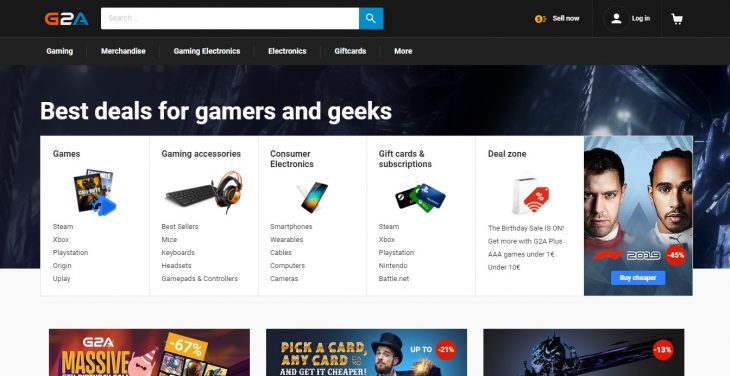 In light of recent outcry from game developers, and a petition which has been launched against them, G2A are defending themselves, claiming that being able to re-sell game keys is a good thing. The petition demands that G2A cease to sell game keys for all indie titles.

Last week Mike Rose of No More Robots requested that consumers pirate the company’s recently published game, Giant Squid’s Decenders, rather than buying game keys for it from G2A. The reasoning behind Rose’s post was that G2A had paid for Google Ads for the game’s name, meaning sales would go to them over any other platform, resulting in neither the developer or the publisher making money from those particular sales.

G2A responded to rose with details of how small the impact of their marketplace was on indie titles. However, Rose and other indie developers were not satisfied, and continued to criticise the company. G2A have now explained that they are going through all of the feedback they have received, and will provide an updated response as soon as possible.

The company did previously point out how key re-selling wouldn’t disappear if they stopped doing it, which many have seen as an admission. Resultantly of the most common criticisms of G2A is that they’ve admitted they’re part of the issue.

G2A also explained that, from their point of view, some people, indie game developers included, can’t handle the concept that consumers can re-sell products they own. They believe it is important for consumers to have access to the games they want to play at a cheaper price through marketplaces like their own.

Rose responded to G2A’s statement by describing how the marketplace decreased the value of games like Decenders. In his example he showed how the game had never been sold for $22.49 officially, but it had been listed on G2A for as little as $13, making the true and fair price for the game seem overly expensive.

The second part of Rose’s argument against G2A was that people could buy keys in one region for one price, and sell them through G2A for a much higher price. G2A thoroughly dispute this, but using their own sales data Rose points out how only three people are responsible for all of the Decenders key sales through the marketplace. A single person sold 100 keys alone, indicating that they had been obtained as a bulk order elsewhere.

As a result Rose has started a petition which proposes that G2A drop all indie game sales. G2A have told Rose that only 8 percent of the game keys they sell each month are indie titles, which Rose argues is an acceptable hit the company should accept. These games would then see more sales that benefit their developers, as opposed to the totally unbeneficial sales through G2A.