Sniper Elite 4 is the fourth installment in Rebellion Development’s popular third-person shooter franchise. Following on from the events of the previous game in the series, Sniper Elite 3 (2014), Sniper Elite 4 reunites gamers with Karl Fairburne, an agent for the Office of Strategic Services with a propensity for picking off enemies with his sniper rifle. The game is available for PC, PlayStation 4 and Xbox One.

Below is an overview of reviews of the PS4 version of the game.

IGN: “A smart, strategic shooter that empowers you to make your own path”

IGN were impressed with Sniper Elite 4 and awarded it a score of 8.3 out of 10. “If you’re going to put “Sniper” in the title of a game, you’d better put serious thought into your weapon mechanics,” the IGN reviewer noted and felt that Sniper Elite 4 delivered strongly in this regard. With factors like wind speed/direction, distance and a weapon’s muzzle velocity built into the game’s mechanics, IGN found plenty of realism and reward in the game’s gunplay. IGN were also impressed with the wide variety of weapons and tactical options available to players in Sniper Elite 4’s single-player mode, though felt they were undermined slightly by the fact that the gameplay didn’t always reward careful strategy – blasting haphazardly at foes could be every bit as effective as painstakingly picking them off at range.

Gamespot were also impressed by Sniper Elite 4 and scored it 8 out of 10. They echoed IGN’s praise for the weapon mechanics and tactical options available in single player but felt that the biggest step forward for the series was the level design. They found the levels to be “expansive sandboxes…brimming with open-ended objectives you can choose to complete in any way you desire and in any order you please.” They did have some reservations about the game, however, noting that the AI mechanics and single-player story could be improved and that they found the multiplayer “tedious.”

Trusted Reviews: “Sniper Elite 4 is an improvement over the last game in subtle ways, but its formula unfortunately outstays its welcome before the credits roll.”

Polygon awarded Sniper Elite 4 a less generous 6.5 out of 10 and elaborated on the frustrations of the game’s limited AI and “inconsequential story.” They noted that “the average Nazi intellect gives Sniper Elite 4 a tiresome sameness,” with alerted enemies running for cover but often getting stuck against a rock or another part of the scenery. Polygon also experienced glitches in multiplayer. Nonetheless, they observed that at its best Sniper Elite 4 delivers satisfying tactical stealth action on a bigger scale than its predecessors.

The Guardian called Sniper Elite 4 a “good-looking but generic World War II shooter,” and awarded it 3 stars out of 5. They found the sniping mechanics excellent, but considered the rest of the game plain, at best, and the story “humdrum.” They referenced the Sniper Elite series’ trademark “gore” – slow motion views of successful kills – and noted that this was still in place and would appeal to some gamers but might upset others.

The Guardian: “bloody and good-looking but generic”

Overall, critics paint a pretty uniform picture of Sniper Elite 4. The game expands on what the series does best – sniping action, gory kills and tactical play – by offering bigger levels and better playing mechanics. However, the game’s story was considered uninspiring, enemy AI was questionable and reviewers didn’t feel the multiplayer was particularly strong. Sniper Elite 4 should appeal to fans of the series looking for an enjoyable single-player experience and new players looking for a game with excellent gun mechanics. 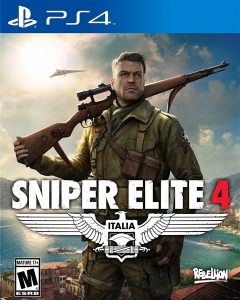 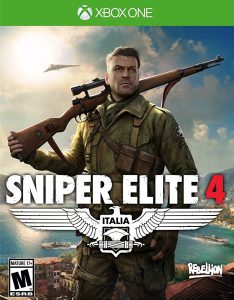