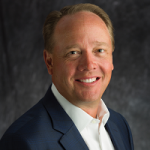 Michael D. Gallagher was the President and CEO of the Entertainment Software Association (ESA) from 2007 to 2018, the trade association that represents U.S. computer and video game publishers.