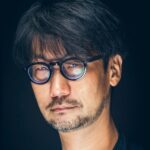 Hideo Kojima is a Japanese video game developer, designer, and producer. He is the founder of Kojima Productions. He has worked for many years at Konami, and is behind such an iconic game series as Metal Gear. He was the screenplay writer, director, and producer of most of the games of Metal Gear series. He has also created and produces Castlevania series, and a number of other popular games.