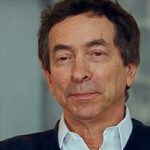 Mr. Weaver is currently a visiting professor at Wesleyan University and MIT.