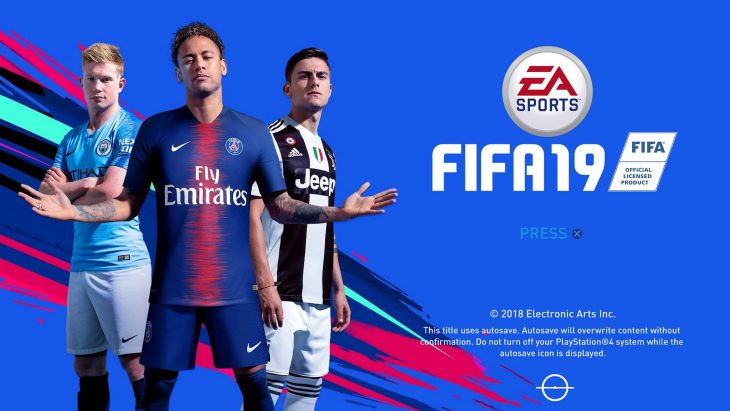 The latest release in the Assassin’s Creed series, Assassin’s Creed Odyssey, is the biggest yet. The game is set in Ancient Greece and casts the player as one of two characters for the first time, without the ability to switch between them. Naval combat and exploration sees a return in Odyssey, alongside an RPG system which makes player’s choices have far reaching consequences. So far the game has been extremely well-received by critics and fans, but with more content on the way soon this will definitely be a hit for many gamers at Christmas. Assassin’s Creed Odyssey is the best-selling game in the franchise for current generation consoles, and still rising. The game is available now for PlayStation 4, PC, and Xbox One, in standard, Ultimate, and Omega editions.

This year’s iteration of EA’s football title, FIFA 19 is the best it’s been in years. The game introduces many brand new concepts, including the ability to focus on collecting a ball from a pass and shooting at a goal. New game modes such as Survival, which removes a player from your team with each goal you score, breathe new life into what had become FIFA’s most basic element. A fully realised FIFA Ultimate Team only adds to the game’s playability, and will keep players coming back for years. While it hasn’t sold as well as FIFA 18 yet FIFA 19 is proving to be a very popular game with fans. FIFA 19 is available now for PlayStation 3, PlayStation 4, Nintendo Switch, PC, Xbox 360 and Xbox One in Standard, Legacy, and Championship editions.

The latest Call of Duty title, Call of Duty: Black Ops 4 is set for release on the 12th of October, and will be available in a number of editions, including the Mystery Box edition. The game, for the first time, shift away from the single-player campaign that has been a staple of the shooter genre for so long. Instead the game doubles down on the core multiplayer and Zombies modes. In addition to these core gameplay modes is Blackout, a new battle royale game mode with a Call of Duty twist on it. The game is set to receive updates over the next year, bringing new maps to all modes, expanding the environmental storytelling alongside new gameplay options. Activision is confident that Black Ops 4 will sell well, and the inclusion of a battle royale mode will definitely help it sell copies as the flavor in gaming currently. Call of Duty: Black Ops 4 will be available on Playstation 4, PC, and Xbox One.

The sequel to the hugely successful cowboy open world game epic, Red Dead Redemption 2 looks to bring much more spaghetti western action to home consoles. The game’s story precedes the original, showing the formation of the gang players hunted down so many years ago. Rockstar Games have crafted a beautiful open world full of activities, putting even Grand Theft Auto 5 to shame. The game will also see the addition of an online mode soon after launch, which is set to be the next Grand Theft Auto Online, providing an alternative for players who want something different. The game is expected to sell as well if not better than Grand Theft Auto 5, so much in fact that Activision moved the release of Call of Duty: Black Ops 4 forward in order to avoid launching too close to it. Red Dead Redemption 2 will be available on the 26th of October in standard, Ultimate, and Collector’s Box editions.

Battlefield 5 continues the trend set by last year’s entry, taking players back to World War 2. The incredible sound quality that the game is known for returns along with the epic-scale multiplayer matches that pit hundreds of players against one another. EA have also teased a battle royale game mode that will release once the game has been out for a few months. The new mode will rival that of Call of Duty: Black Ops 4, but being set in a different time period will more than likely be another alternative, as opposed to direct competition. Last year Battlefield struggled to compete with other releases such as Assassin’s Creed Origins, and this year the game will most likely struggle again with the competition of Red Dead Redemption 2. Battlefield 5 will be available on the 20th of November in standard and Deluxe editions.

Bethesda is moving away from the single-player RPG genre this year and releasing Fallout 76, an online RPG set in the Fallout universe. Players take on the role of those Vault Dwellers who were the first to ever leave a Vault. Every human character is another player, with dozens of players on each server instead of hundreds. The huge open map is packed with events and quests, allowing players to progress through the game in either groups, or on their own. The game is set to divide the fan base, but will no doubt be incredibly successful given how popular Bethesda’s other MMO, The Elder Scrolls Online, currently is. Fallout 76 will be available on the 14th of November in standard, Power Armour, and Pip-Boy editions.

Sequel to Io Interactives 2016 release of Hitman, Hitman 2 brings more sandbox assassination to gamers. Hitman 2 has refined mechanics and new systems that allow players to hide in crowds, identify opportunities, or spot potential threats. The game will add a brand new campaign to the overarching Hitman story, in addition to remastered versions of the missions from the 2016 game, inducing all the new mechanics Hitman 2 has to offer. Hitman 2016 sold quite well, but due to its episodic nature many players never saw it through to the end. With Hitman 2 Io Interactive present consumers with a full release that is expected to sell far better because of the inclusion of all content, as well as that from the previous game. The Gold edition of Hitman 2 launches on the 9th of November, and the standard edition launches on the 13th of November.

The fourth entry to the Just Cause series brings players up against the organisation that’s been helping protagonist Rico for so long, The Black Hand. the game offers even more opportunities to traverse the environment by land, sea, and sky, destroying everything in their path should they choose to. The main addition with the title is the ability to control the weather, namely a huge tornado which rips apart anything in the vicinity, offering lots of opportunities to surf debris and perform death-defying stunts. The Just Cause games have always sold well thanks to the refined gameplay mechanics they offer, and this addition to the series looks to be no different. Just Cause 4 launches on December 4th, and is available in standard, Gold, and Steelbook editions.

The third title in the Darksiders series sees players return to Earth after the apocalypse was triggered early to murder the sisters of Fate. fury, the third horseman of the apocalypse in the Darksiders games, has new abilities that will offer different challenges to players. The gameplay has been overhauled so that areas are much more open for exploration, and the combat system has been refined so that one wrong move could result in the death of the protagonist. Given the success of the previous two titles the game is expected to perform well at retail, with two of the available editions selling for over £100. Darksiders 3 launches on the 27th of November in standard, Apocalypse, and Collector’s editions.

Nintendo delayed the release of a full Pokemon RPG to 2019 in favour of a Pokemon Go tie-in title with Pokemon Let’s Go Eevee and Pikachu. The games follow the same core gameplay as the mobile version, but allow players to take Pokemon with them to earn in-game items. Players are also able to trade and battle with others on Nintendo Switch, as well as those on the mobile version of Pokemon Go. While there will be some story elements, Pokemon Let’s Go is a definite extension of the mobile game, but is still expected to sell well as the first current generation console version of a Pokemon game for many years. The game will launch on the 16th of November and is available in Eevee, Pikachu, and Pokeball Plus editions.

Following in the wake of the popularity of Crash Bandicoot N.Sane Trilogy, the Spyro Re-Ignited Trilogy packs in the remade versions of the first three Spyro titles for current consoles. The games have been beautifully remastered and brought up to current gaming standards, meaning the controls won’t annoy players and the visuals are better than some current releases. The game should sell well if the Crash Bandicoot remastered’s success is anything to go by. The Spyro Re-Ignited Trilogy will launch on the 13th of November.

Soul Calibur 6 is set to release on 19th of October. The game brings more characters than ever to the fighting series, including geralt of Rivia from The Witcher franchise. The game has refined fighting mechanics which should prove to provide some of the best fighting on consoles to date. This release also packs in more content than any other, with an endless story mode that takes in every character, individual tales, and a number of multiplayer game modes. The game is expected to sell well as one of the only fighters to release in the run up to Christmas, particularly with the inclusion of Geralt, a beloved character in gaming.