Worldwide digital spending rises by 25% in May 2018 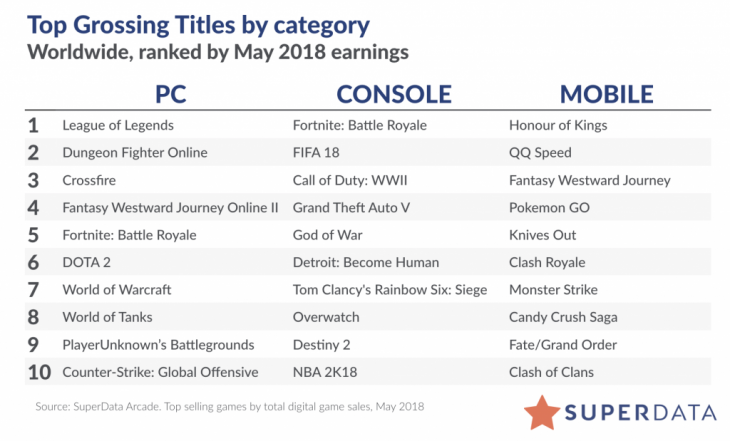 According to SuperData’s report on the worldwide digital games market for May 2018 global digital spending has increased by 25 percent year-on-year. It’s estimated that $9.1 billion was spent digitally, an increase on May 2017 which saw spending of $7.3 billion. The largest influence on this trend is thought to be Fortnite, with mobile segment spending up 36 percent, and the free-to-play console segment generating £200 million from the game alone.

Fortnite generated over $300 million, $318 million to be exact, in May alone, a rise from april 2018 of 7 percent. The core of the game’s growth here is shown to be generated by console players, while mobile and PC players continue to contribute at a fairly similar rate to the previous month. These figures do show growth but it’s beginning to plateau, and Epic Games will need to bring out further new features and promotions in order to entice new players into spending.

Pokemon Go has seen a massive boost to player count, increasing to the point that in May 2018 it was at its highest since the peak in 2016. The game generated $104 million for the month, a rise of 174 percent year-on-year. A new trading system implemented by developer Niantic has gone a long way towards giving fans the features they want. However the biggest driver for the game’s growth is the announcement of Pokemon Let’s Go Eevee and Pikachu, new titles for the Nintendo Switch that will interact with the mobile game.

Detroit: Become Human sold 291,000 copies digitally at launch in the month, a resounding success for a PlayStation exclusive launch and a new IP for the PlayStation 4. The game was criticized for certain features such as a clunky camera system, but all who played it agreed that it was one of the most stunning, if not the most, games of 2018 graphically.

After backlash from fans forced EA to remove microtransactions from Star Wars: Battlefront 2 they have now been re-introduced. Originally the microtransactions presented a poorly veiled pay-to-win model of the game, whereas now the microtransactions will not affect player-ability. Even so spending in-game was well below what other titles saw for the month, showing that EA still have a long way to go before they win back the trust and loyalty of the fanbase.