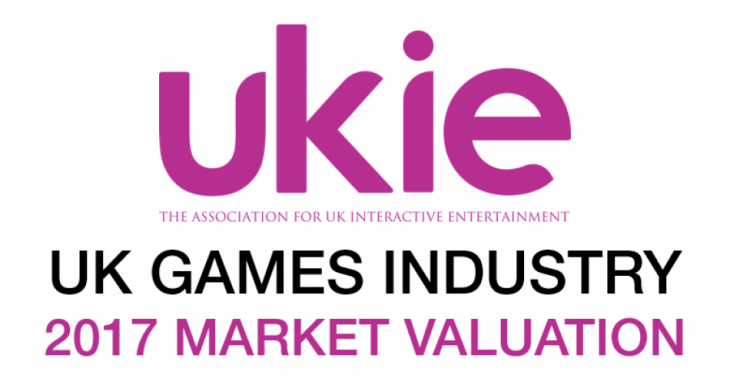 UK trade body UKie revealed that the UK games market was worth £5.11 billion in 2017. This is an increase of 12.4 percent year-on-year almost entirely across the boards.

Hardware figures saw a massive boom largely thanks to the launch of the Nintendo Switch. The sector saw an increase of 29.9 percent. GfK’s Dorian Bloch said that these figures show a solid performance for the UK’s physical software market, as well as a boost to the growth of the UK’s console hardware market which hasn’t happened since 2014. 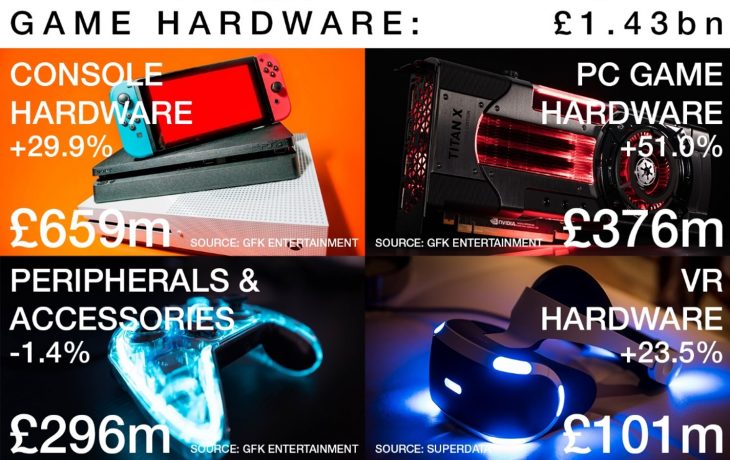 He added that the PlayStation 4 has managed to sell 1 million units a year consistently, easily outselling Microsoft’s Xbox One S, even though it’s now priced at under £200, as well as the premium console gaming experience of the Xbox One X. He ended by saying that the Nintendo Switch is a brilliant comeback for Nintendo home gaming, calling it a console that may envy the sales of the Wii.

Boxed software sales saw an increase of 3.1 percent compared to the year before, but they were still well below those of 2014 and 2015. This trend is expected to continue, with growth steadily increasing thanks to a better level of major releases and far fewer sub-par games getting through publisher nets. Interestingly pre-owned sales have seen a decrease of 15.1 percent, thought to be a result of gamers wanting to own titles for longer, playing them and replaying them more often than they used to. 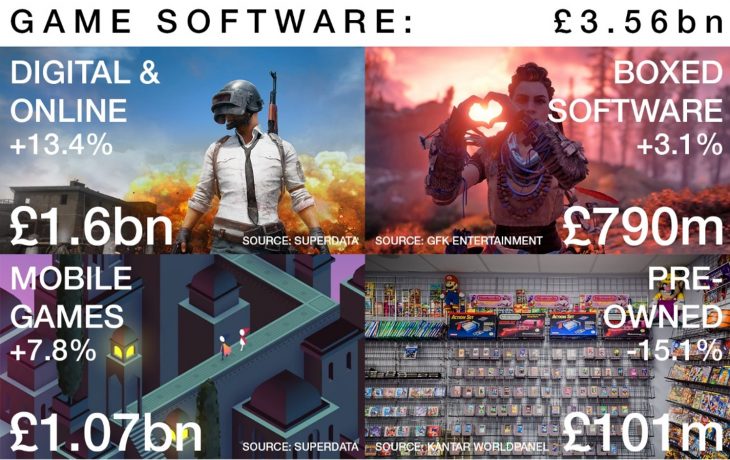 Digital and online sales saw an increase of 13.4 percent compared with the previous year, reaching £1.6 billion for the year. This is the result of gamers preferring to buy their games digitally from the comfort of their own home, as well as the impact of microtransactions. 42 percent of digital games revenue came from premium PC titles, which is quite high compared to the 14 percent they made up globally and 34 percent in Europe. Mobiles games also saw growth in 2017, rising by 7.8 percent to over £1 billion for the entire year.

Gaming peripherals and accessories saw a decrease of 1.4 percent to £296 million. While this decrease probably doesn’t indicate any immediate change in the industry it is interesting given that there is now far much more focus on customized controllers for consoles such as the Xbox One.

PC gaming hardware grew by just over 50 percent, 51 percent to be exact, with eSports games and PUBG being attributed as major contributing factors. As games require better hardware and gamers want their games to look the best they possibly can, the sector has seen a massive boom for items such as graphics cards, though peripherals like headsets, mice, and keyboards are also part of the culture.

Finally VR hardware broke through the £100 million ceiling with growth of 23.5 percent. However, without strong software in 2018 the sector won’t see the same kind of growth again, consumers need more and better reasons to invest in VR technology. 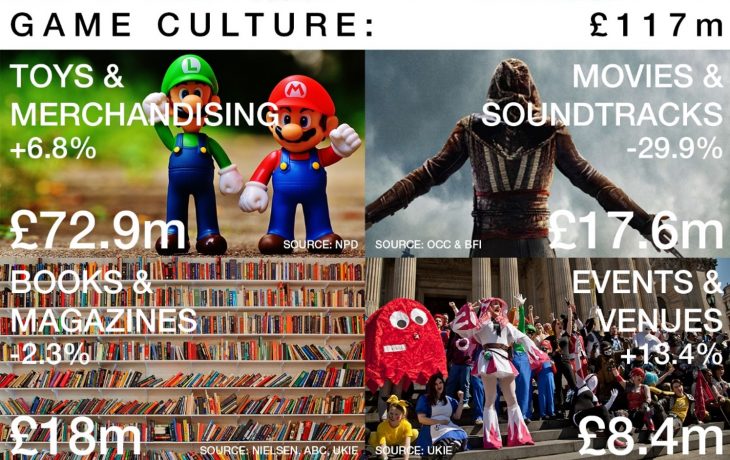 Related Topics: Industry
By Admin in: Wholesale Games Industry and Market News on March 2, 2018 at 4:32 pm