This year the global games market will reach $137.9 billion 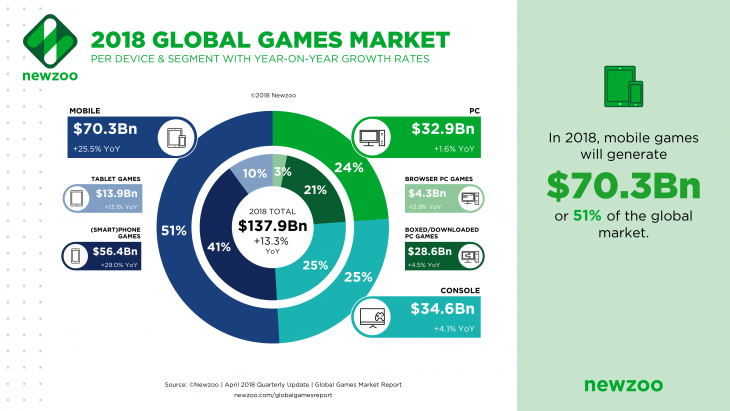 Newzoo, a market intelligence firm, has reported that they expect the global games market to grow to $137.9 billion this year. They expect revenue for mobile to be just over 50 percent, with consoles and PC generating around 25 percent each.

According to these predictions 2018 will be the first year ever that half of the revenue generated by the games industry will come from the mobile segment. Recent spending trends have shown a preference towards digital purchases, and the launch of Fortnite and other battle royale titles on mobile will definitely play a part in these numbers.

Newzoo have broken down the numbers a little to reveal more about their data. Across the industry revenue is up by 13.3 percent, which has mostly been spearheaded by an increase in mobile revenues of 25.5 percent to $70.3 billion. Newzoo report that smartphones will make up about 80 percent of the overall figure of 50 percent of the global games market, with tablets picking up the remaining 20 percent.

Consoles and PC are expected to perform at relatively similar levels to each other. Consoles are predicted to generate a little over 25 percent of the global games market revenue with $34.6 billion, while PC is predicted to contribute almost 24 percent with $32.9 billion. Newzoo add to this that they foresee 91 percent of the games market revenue to be generated from digital purchases globally. 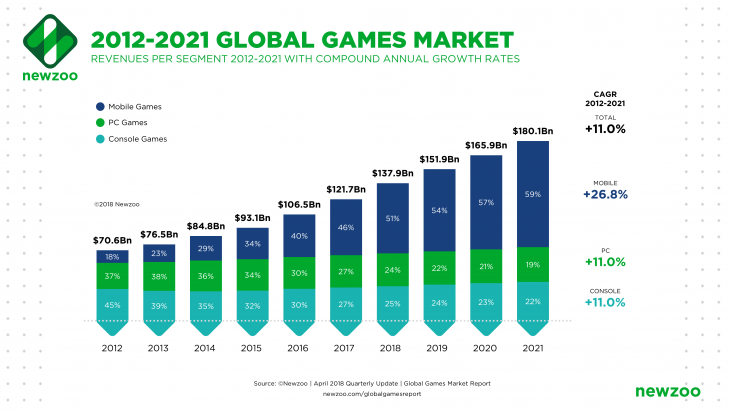 The compound annual growth rate of the games industry is predicted to grow at a consistent rate of double-digits every year, Newzoo report. The market is expected to reach $180.1 billion in revenues generated by 2021 with a growth rate of 10.3 percent from this year onwards.

A spokesperson for Newzoo said that by 2021 smartphone and tablet game sales will make up 59 percent of the overall games market. They find it interesting that the growth of the mobile segment, from the smallest segment to the largest by 2021, hasn’t affected the console and PC segments. It seems as though just as many gamers are playing on PC and console whilst more emerge on mobile devices, a trend Newzoo expect to see continue.

Regarding PC revenue, Newzoo believe that this segment will fall behind in the future. This is due to a combination of the decline in average spend on pay-to-play titles, as well as the fact that most PC games are close to the maximum potential for monetisation. However, engagement with PC games is expected to maintain itself thanks to eSports and competitive multiplayer.

The compound annual growth rate for the PC segment is less than half that of the console segment. PC is expected to grow by 1.8 percent from 2017 through to 2021, with consoles performing better with a growth rate of 4.1 percent in the same time period. The expected growth for console comes with a stipulation that publishers must continue to find ways to further monetise games, optimising their income from them. 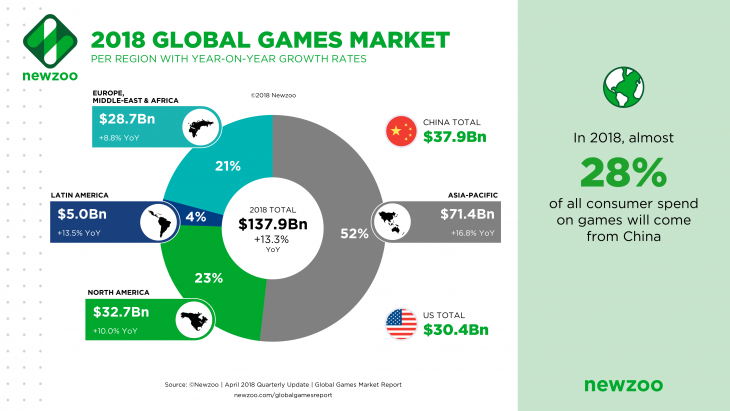 Related Topics: Global Games Market Report, Newzoo
By Admin in: Wholesale Games Industry and Market News on May 1, 2018 at 4:22 pm