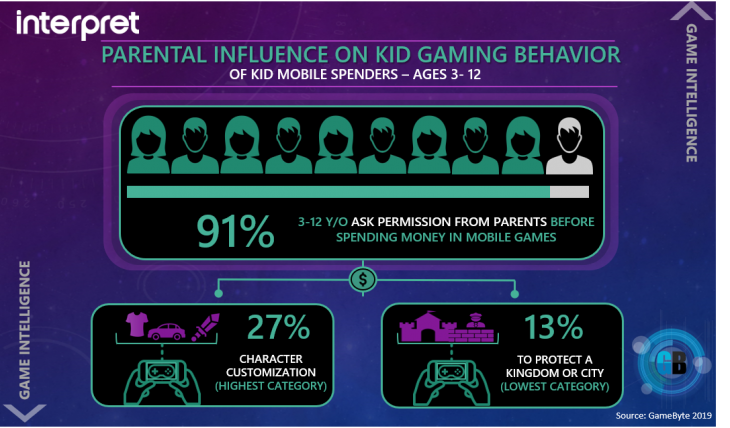 According to a report from marketing intelligence firm Interpret, the average amount that parents spend on their children on game-related content is $433 a year.

Specifically for children aged three to twelve, spending has seen an increase in 2018 by 34 percent year-on-year, according to the GameByte report. This spending is estimated to have accounted for one third of all entertainment spending for the year.

The average amount parents spent on gaming content for their children in 2018, as a result of this increase, was $1,300. This equates to an increase of 25 percent year-on-year from 2017. The report also found that of this age range of children 91 percent of them always asked permission before making in-app purchases.

Vice President of Research and Strategy for Interpret, Jesse Divnich, said that because of the very interesting figures surrounding asking billpayer permission before an in-app transaction is made, developers need to be more aware of the fact that they’re targeting dual audiences.

Divnich went on to say that a big part of children justifying a purchase is how it aligns with that particular parent’s view of what is best for their children. Making in-app purchases align with the ideals of these parents should be part of the strategy behind getting players to engage with them.

Divnich added that the publishers and developers who put the time, effort, and money into understanding their relationship with this dual customer base are the ones who succeed in the market. Many companies don’t put enough effort into understanding this complex audience type, and they often struggle to find a foothold with either as a result.

The report also showed how important it is for children to be able to play games with their parents. An impressive 78 percent said that whether or not they could play with their parents was a deciding factor as to whether they would play the game.

Finally, the report showed that 19 percent of parents gave their children allowances to spend on video games specifically, while 33 percent said they give their children some in-app purchases as part of their allowance.