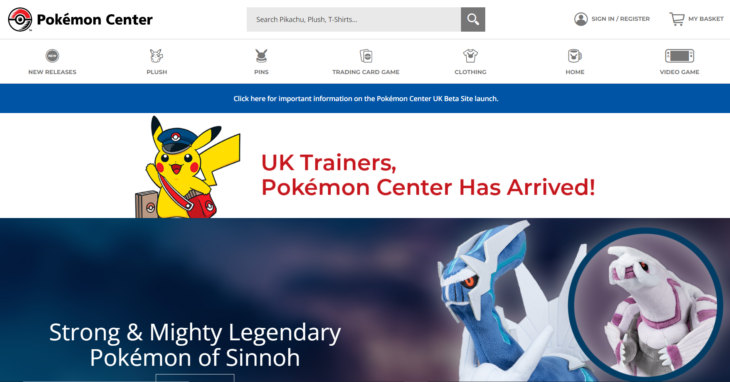 Despite The Pokemon Company only having opened a physical Pokemon Centre UK store two years ago, an online shop has now been opened without anything in the form of an announcement.

Even though it’s only been open for a week, there are already several items that are out of stock. This includes a huge Piplup plushie that was priced at £89.99, showing just how big the demand for the products at the store are, especially around this time of year.

Interestingly, the video game section of the website only shows Pokemon Legends: Arceus at this point in time. Pokemon Briliant Diamond and Shining Pearl were both released very recently, but they’re surprisingly absent from the online store.

The physical store that appeared in the UK in 2019 was a pop up store. This was no doubt an effort to cause more interest due to the limited availability, but also keep costs down because Pokemon products really area finite commodity.

Now that there’s a UK online store for the Pokemon Centre, more and more people should be able to pick up the products they want. However, this removes the limited availability element of many of them, meaning demand may drop in the future. Though with an online business like this, there’s no need to worry about such things as long as limited stock is ordered.

There will no doubt be a lot of new products coming to online store alongside the release of the first season in Pokemon Go and the full release of a new Pokemon game in Pokemon Legends: Arceus.

Many fans are excited for the future of Pokemon, and there really hasn’t been a better time to be a fan of the franchise. Pokemon Legends may be a brand new line of mainline entires to the series, and there are many live Pokemon games that fans can enjoy.

One of the biggest Pokemon games that’s multiplayer-only is Pokemon Unite, for which there’s a shocking lack of any products on the Pokemon Centre website. No doubt there are plans to push the game and products for it more, but The Pokemon Company seems to be behind, as many companies are, due to production chain issues.

Related Topics: Pokémon, Pokemon Legends: Arceus
By Admin in: Wholesale Games Industry and Market News on December 14, 2021 at 7:33 am