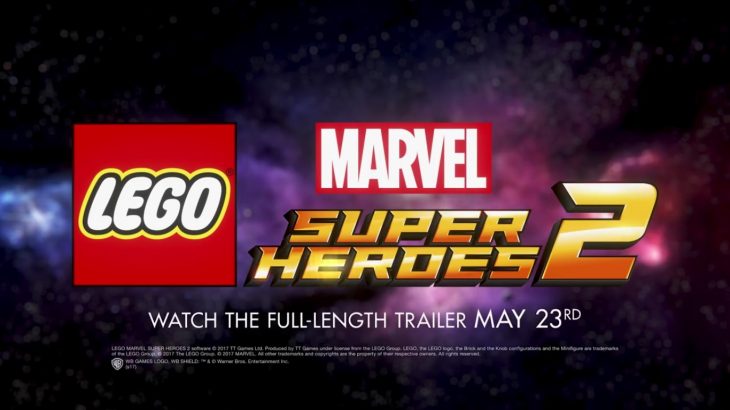 Today via a post on the official Facebook page, Lego Marvel Superheroes 2 was officially announced with a teaser video.

Lego Marvel Superheroes 2 has been officially announced, though only a teaser trailer for the game has been released so far. The teaser is a play on the Guardians of the Galaxy Vol 2 trailer, a marvel movie which recently opened in cinemas. In the trailer Baby Groot can be seen running away from a very large enemy. At the end of the teaser promising text is revealed telling fans that a full reveal trailer will be published on May 23, 2017.

In the official art for the game, which has also been revealed, we can see some of the cast of Marvel superheroes who will be joining the fun. The game is said to contain plot points and characters from recent Marvel movies, though we expect any movies that release before the game will also be included, as well as future titles via DLC.

Already we can see that Rocket Raccoon and Baby Groot will be playable characters, which may also mean other Guardians of the Galaxy characters will be featured such as Star Lord. Hulk in the armour seen in trailers for Thor 3 is also visible alongside Captain America, and even Superman appears to be watching from above.

Interestingly we can see two different versions of Spiderman, which isn’t a surprise considering Spiderman Homecoming is releasing in cinemas this year. However, what is surprising is that the version of Spiderman we see are 2077, and possibly Anti-Venom. Spiderman 2077 is the one from the future who uses technology to imitate the long gone hero who was Spiderman. Anti-Venom meanwhile is the opposite of Venom, the symbiotic alien that threatens to destroy Spiderman on multiple occasions, though Anti-Venom is an ally to Spiderman instead of a threat.

Related Topics: Lego Marvel Superheroes 2
By Admin in: Wholesale Games Industry and Market News on May 15, 2017 at 10:17 pm