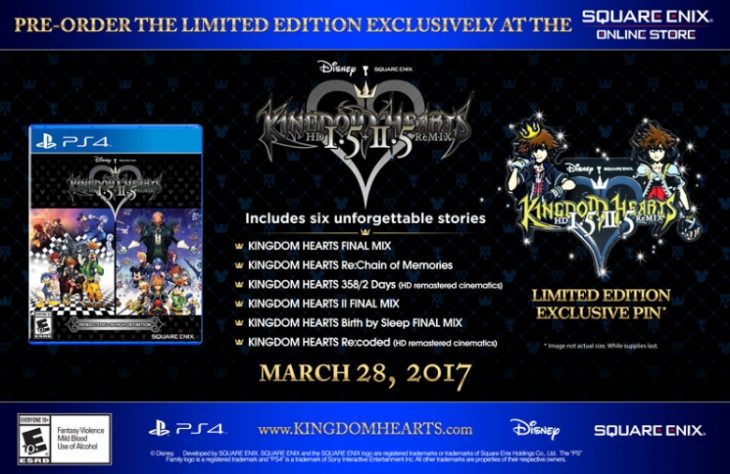 The Limited Edition of Kingdom Hearts HD 1.5 + 2.5 Remix pre-orders have been announced. The limited edition collection on Playstation 4 brings together six Kingdom Hearts games, all of which have been remastered for the current-gen console. All games have fully remastered HD cinematics, needed more for the games from lower-resolution consoles such as the Nintendo DS.

This version of the game is available for pre-order only through the Square Enix store, and includes a collectable Sora pin, depicting two versions of the protagonist of the core games. While the additional cost for a pin may not appeal to many, collector’s and fans of the series are sure to find the limited edition more appealing than the basic release.

Bringing the Kingdom Hearts series together in one game is perfect for those looking to get into the series. Anyone who purchased the most-recent game in the series might have a lot of questions if it’s the only one they’ve played. Kingdom Hearts HD 2.8: Final Chapter Prologue was recently released to help tie together the open storylines of the previous games, and lay some foundations for upcoming release, Kingdom Hearts 3.

The Kingdom Hearts games follow the story of Sora as he tries to find his friends, encountering Disney, Final Fantasy, and The World Ends With You characters in their worlds. As an action role playing game the combat is quite different from Final Fantasy games, but still thoroughly enjoyable. The blend of Final Fantasy and Disney alone is what makes the series so magical for some, but it’s the story, mechanics, and even the secret boss fights that keep fans coming back for more.