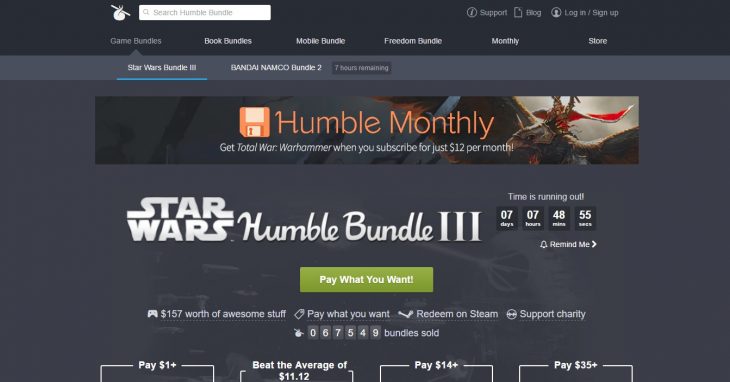 Humble Bundle have announced the launch of a new publishing and funding initiative, marking their plans to move into the game publishing business. The initiative is a multi-million dollar investment for games of all sizes, beginning with seven games across a range of genres and all platforms, including PC and consoles.

Best known for their monthly games bundles, Humble Bundle offer packages of game keys for a bargain price, with the profits going directly to the developers. Many believe Humble Bundle is the best way to purchase video games, at least for PC, because the developers get the best deal out of the sale. Humble Bundle also work with a number of streamers and YouTubers to raise money for charity each year, most-notably raising £2.5 million over Christmas with the Yogscast.

Since their launch in 2010 Humble Bundle serves more than 10 million customers, and offers a Humble Partners affiliate program to introduce games to new customers. But this new initiative is about more than getting new games into gamer’s hands.

The publishing service, which Humble Bundle will offer, differs depending on what the developer wants. That isn’t to say that it gets better the more they pay, it’s actually catered to what the developers want from their publisher as a service. Obviously there will be a cost for more services, but it’s important to remember that Humble Bundle want to do the best they can for the games they’ll be publishing. Everything from localisation, ports, marketing, and everything else a game needs from their publisher will be on the table.

The seven games Humble Bundle are launching their new initiative with are; A Hat In Time, HackyZak, Ikenfell, Keyboard Sports, No Truce with the Furies, Scorn, and Staxel. All of these games will be on show at GDC, and Humble Bundle will be taking applications for the initiative for other games.

Related Topics: Humble Bundle
By Admin in: Wholesale Games Industry and Market News on February 14, 2017 at 11:21 am