Games market driven by mobile and console gaming in 2019 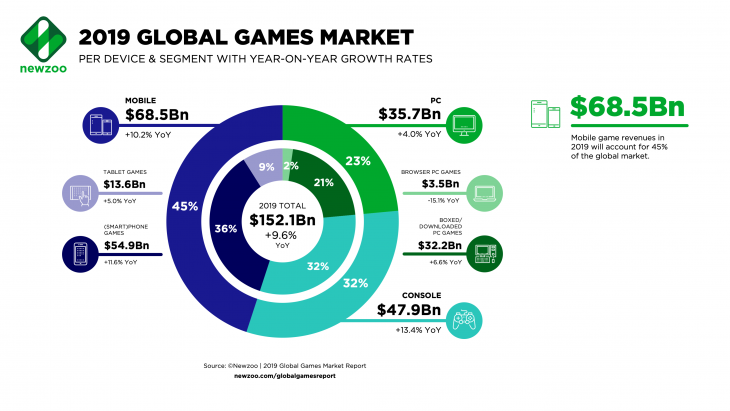 According to Newzoo’s Annual Global Games Market Report for 2019, the games market this year will be driven by both the growing mobile gaming market, and the strong install base both the PlayStation 4 and Xbox One have generated towards the end of their life cycles. This year the global games market is predicted to generate $152.1 billion in revenue.

Newzoo have released their Annual Global Games Market Report for 2019, which projects the year to come for the games industry, as well as the next three years up to 2022. Newzoo form this report from 62,500 consumer research surveys, across 30 different countries which constitute around 90 percent of global game revenue.

It’s predicted that, like most recent years, mobile will make up 45 percent of global games revenue, generating $68.5 billion altogether. Of this 45 percent, 80 percent is predicted to come from smartphone games, with the remaining 20 percent from tablet devices.

This year will see the continued drop of PC revenue, as browser game revenues decreased. An expected fall of 15.1 percent in revenue is predicted for the PC gaming segment, bringing in $32.3 billion for 2019. 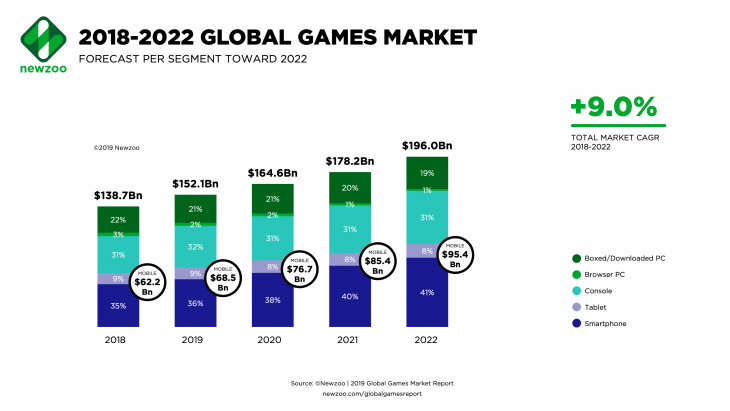 The US is projected to be the biggest games market for 2019, which is the first time since 2015 that China hasn’t been projected in its place. Last year’s game license freeze in China is the reason behind this shift. As a region the US will bring in an estimated $36.9 billion in revenue, mostly driven by console growth. North America specifically is expected to be the second-largest region for the year, generating a predicted $39.6 billion in revenue.

Asia-Pacific is projected to be the largest region for 2019, generating 72.2 billion for 2019, growth of 7.6 percent compared to last year, and making up 47 percent of revenue for the global games market.

Newzoo predicts that the global games market will bring in $196 billion by 2022, mostly driven by the growing mobile games market. However, Newzoo add that a new Nintendo Switch model and next generation consoles from Sony and Microsoft will also help the market reach this point.

Latin America is expected to overtake Asia-Pacific as the fastest-growing region. This is due to Chinese game license freezes, as well as a concerted effort to reduce time spent playing games in under 16s in the region.

By 2022 Newzoo project that the mobile games market will generate $95.4 billion, pushing it up to 49 percent of the global games market value. Also by 2022, PC revenue is expected to slowly grow to $39.5 billion, and console to $61.1 billion. 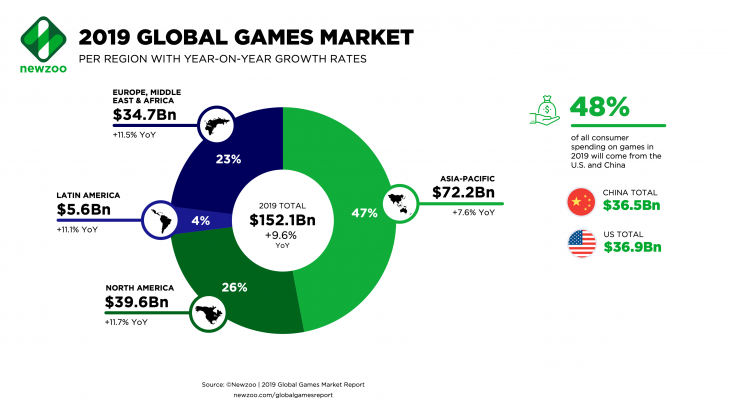 Related Topics: Newzoo
By Admin in: Wholesale Games Industry and Market News on June 19, 2019 at 9:35 am